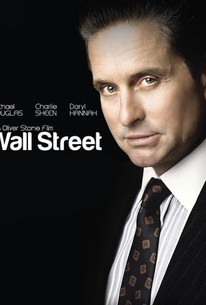 Critics Consensus: With Wall Street, Oliver Stone delivers a blunt but effective -- and thoroughly well-acted -- jeremiad against its era's veneration of greed as a means to its own end.

Critics Consensus: With Wall Street, Oliver Stone delivers a blunt but effective -- and thoroughly well-acted -- jeremiad against its era's veneration of greed as a means to its own end.

Critic Consensus: With Wall Street, Oliver Stone delivers a blunt but effective -- and thoroughly well-acted -- jeremiad against its era's veneration of greed as a means to its own end.

"Greed is Good." This is the credo of the aptly named Gordon Gekko (Michael Douglas), the antihero of Oliver Stone's Wall Street. Gekko, a high-rolling corporate raider, is idolized by young-and-hungry broker Bud Fox (Charlie Sheen). Inveigling himself into Gekko's inner circle, Fox quickly learns to rape, murder and bury his sense of ethics. Only when Gekko's wheeling and dealing causes a near-tragedy on a personal level does Fox "reform"-though his means of destroying Gekko are every bit as underhanded as his previous activities on the trading floor. Director Stone, who cowrote Wall Street with Stanley Weiser, has claimed that the film was prompted by the callous treatment afforded his stockbroker father after 50 years in the business; this may be why the film's most compelling scenes are those between Bud Fox and his airline mechanic father (played by Charlie Sheen's real-life dad Martin). Ironically, Wall Street was released just before the October, 1987 stock market crash. ~ Hal Erickson, Rovi

Monique van Vooren
as Woman at '21'

Martin Sherman
as Banker at "21"

Oliver Stone's Wall Street is exactly what I had hoped for -- a sensationally entertaining melodrama about greed and corruption in New York, a movie that evokes the power of big money so strongly that you can savor it on your tongue like Stilton and port.

The sensibility of this movie is so adolescent that it's hard to take it as seriously as the filmmakers intend us to.

Watching Oliver Stone's Wall Street is about as wordy and dreary as reading the financial papers accounts of the rise and fall of an Ivan Boesky-type arbitrageur.

Stone's attack on the excesses of the Me Decade could easily be dubbed Mr. Smith Goes to Wall Street.

Douglas steals the show as the rich guy viewers love to hate.

Much is made of Douglas' superbly sleazy display here, but the heart of the film is Charlie Sheen's anchoring effort as the stock market ingenue getting a crash course in cornering other people's cash.

A lavish misstep in the straight career of this filmmaker. [Full Review in Spanish]

Michael Douglas has a splendid part here, and tackles it with relish.

The conflict may be familiar, but Stone brings the mystery of Wall Street's heros and villains, its big-stakes players and two-bit salesmen into sharp focus. It's a look that is both exhilarating and astounding.

...an eye-opening behind-the-scenes glimpse at an almost alien landscape.

With Michael Douglas in a superb and unforgettable performance as the voracious shark Gordon Gekko, this is an excellent film that relies on an elegant dialogue to tell us a fascinating story about man's greedy desire to score more and more in the stock market game of power.

I'll be honest, I'm not the biggest Oliver Stone fan. He's some great films (Platoon, Natural Born Killers) but I find that his films basically deal with the same subject. However with Wall Street he makes a very solid, and entertaining film about a Wall Street Broker, Bud Fox (Charlie Sheen) who is eager to make it big on Wall Street. The film examines Fox's relationship with Corporate raider Gordon Gekko (Michael Douglas) and how both men use insider trading information to make large sums of money. Only when his relationship with Gekko sours does Bud Fox destroy Gekko with his competition. Wall Street is an interesting film that takes a good look at corporate greed and how some people will do anything to gain fortunes. Brilliantly acted by Michael Douglass and Charlie Sheen, Wall Street is an effective dramatic thriller that is very suspenseful. Oliver Stone delivers a good film and the cast here are terrific. Wall Street is a well crafted film that is one of Stone's best films. If you're looking for a good, entertaining film that makes insider trading an interesting subject for a film, then Wall Street is that film. The film may not be perfect, but it delivers good entertainment and like I said it's one of Stone's best films aside from Platoon. Oliver Stone has succeeded in making a not so interesting subject entertaining for a film, and for the most part, Wall Street succeeds in deliver solid drama and thrills. A worthy film to watch for sure.

Seeing this movie, I feel kind of ripped off knowing going in that Gordon Gecko was the villain. I think figuring that out for myself might have been a pleasure unto itself, but I can't get too angry. This movie on the whole is engaging from beginning to end, and despite its running time, I was never bored. I think it IS a little too long though. Apart from that, I can find few complaints. It's a great Paradise Lost-type story of the seduction, corruption and redemption of a young man, all placed within 1988 Wall Street. Ingenious, really, in the way it places the story in a very timely and specific spot, but plays as well now as ever it did. I don't think I've ever seen a villain as slimy, slick, glib, gleeful and playful as Gordon Gekko. I don't think he ever actually calls his protege by his name; it's always "Buddy" or "Sport" or "Pal", making the dissonance between his chumminess and his callousness even more jarring. He's fascinating; motivated by an arbitrary goal to do callous things for his own... amusement? He loves his job, and though he'll tell you that he's all about the Benjamins, I think he's really all about the power. I wonder if he'd do what he does even if he weren't getting paid. Douglas deserved his award, without question. I also loved the juxtaposition between Gekko and Carl Fox, Bud's father. It must be seen to be believed.