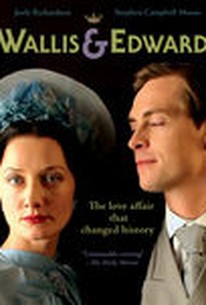 Director David Moore collaborates with screenwriter Sarah Williams to explore the forbidden love that ultimately drove King Edward VIII to become the only British monarch ever to voluntarily step down from the throne. It was at a fashionable party in 1931 that Edward, Prince of Wales first met outspoken American Wallis Simpson. Though married at the time of their initial meeting, Simpson and her husband would subsequently accompany Edward to numerous parties and social gatherings. Aware of Edward's increasing infatuation with his unquestioningly faithful wife but unwilling to give up the perks that come with being in the royal inner circle, Simpson's husband willingly went along with the ruse before eventually abandoning the marriage to be with another woman. Much to the consternation of the royal family - who viewed a twice-divorced American as an improper match for the future king - Edward and Simpson would subsequently enter into a romance that was still going strong when Edward's father died in 1936. Now faced with the prospect of abandoning the woman he loves for the sake of fulfilling his royal birthright, Edward's refusal to end his relationship with Simpson was seen as a baffling and infuriating weakness driven by selfishness and recklessness by the rest of his family. Later, as Simpson is demonized by the press, the royal family, and the public at large, she offers to leave the country quietly so that Edward can assume his rightful position on the throne. But her offer had fallen on deaf ears, and on December 10, 1936 Edward renounced the throne for both himself and his descendents in order to follow his heart and be with the woman he truly loved. As a result of his decision, not one member of the royal family would attend the wedding of the Duke and Dutchess of Windsor. ~ Jason Buchanan, Rovi

There are no critic reviews yet for Wallis & Edward (Her Royal Affair). Keep checking Rotten Tomatoes for updates!

In one word- dull.