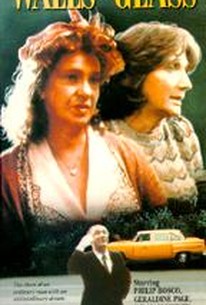 The never-say-die attitude of James Flanagan (Philip Bosco) a graying New York taxi driver whose real vocation is playing Shakespeare, underscores the spirit that runs through his life and this standard drama. First infected with the Bard's magic by his father, dead these many years, Flanagan recalls his idyllic visions as a youth. Now he is "trapped" in his taxi, suffers through a broken marriage, has two teenage sons of his own, and not much luck at auditions. Things that go wrong seem to come in clusters, and it is at one such downturn that Flanagan is almost ready to give up.

Holly Marie Combs
as Classmate In Flash Back
View All

Critic Reviews for Walls Of Glass

There are no critic reviews yet for Walls Of Glass. Keep checking Rotten Tomatoes for updates!

There are no featured reviews for Walls Of Glass at this time.