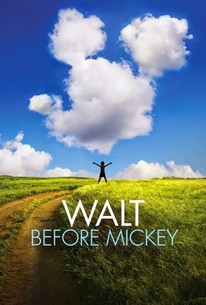 This film is about Walt Disney's early years. For ten years before the creation of Mickey Mouse, Walt Disney struggled with, failed at, and eventually mastered the art and business of animation. Walt Disney worked in a variety of venues and studios, refining what would become known as the Disney style. This film captures the years 1919 - 1928, creating a portrait of the artist from age seventeen to the cusp of his international renown.

Critic Reviews for Walt Before Mickey

The great man certainly deserves better that is for sure.

An HBO level biopic of Walt Disney, which makes it better than Saving Mr. Banks, but still not the definitive Walt Disney movie.

Maybe this is the perfect version for everyone who thought the first hour of the PBS American Experience documentary savaged the idealized legend of Walt Disney.

The story is solid, but the screenplay is only partially effective, content to mope along with little joy or whimsy. And scenes resemble re-enactments more than meaningful human encounters.

A dull script, flat performances and lighting that would embarrass a wedding photographer ruin a promising Walt pre-DISNEY story.

Watered-down "young Disney" biopic is too bland to appeal.

Audience Reviews for Walt Before Mickey

"Walt Before Mickey" is a pretty nauseating experience. The acting is bad, the direction is bad, the script is bad and the story is very uninteresting. Just because the man was legendary doesn't mean his life merits a movie. On top of all that horrible camp, there is a voiceover that is supposedly in Walt's own words, but all it does is insult the audience making it seem like they can't follow the story. It's presumably a family movie but what kid wants to see this? It would've made a better documentary and has made a better documentary.