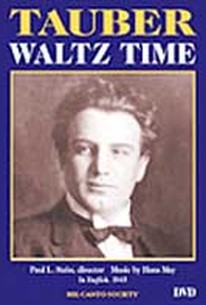 In this British costume musical, Carol Raye plays Empress Maria, a young woman of noble blood who has fallen in love with Count Franz Von Hofer (Peter Graves), one of the men assigned to guard her. Maria's guardians attempt to dissuade her interest in Franz because of his reputation as a Casanova, and when Franz is discovered in a playful conversation with Cenci Prohaska (Patricia Medina), they are convinced that their assumptions are correct. When Maria learns of Franz's behavior, she disguises herself as Cenci for an upcoming costume ball with the hopes of catching Franz in a disloyal act. Waltz Time also features a guest appearance by the celebrated operatic vocalist Richard Tauber, who sings two numbers; it was one of Tauber's final screen appearances, as he passed on in early 1948. ~ Mark Deming, Rovi

Hay Petrie
as Minister of War

Hans May
as Gypsy Troubadour

There are no critic reviews yet for Waltz Time. Keep checking Rotten Tomatoes for updates!

There are no featured reviews for Waltz Time at this time.