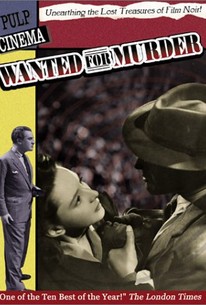 Anne Fielding (Dulcie Gray), a shop clerk, meets Jack Williams (Derek Farr), a bus conductor, on the London Underground. She's delayed by the train for a meeting with her friend Victor Colebrooke (Eric Portman) at Hampstead Heath; the two of them take a liking to each other while she's trying to find Victor. She finally locates him and they leave at virtually the same moment that a young woman is found strangled -- the latest in a series of six stranglings in London. The police investigate anyone who might have been with the victim -- that includes Jack, who was seen leaving in a fury late in the evening, and Victor, whose handkerchief was found in the vicinity of the body by a derelict. In a neatly Hitchcockian twist, however, the police soon get on to the right man, but between the ineptitude of one officer and sheer bad luck, Scotland Yard is unable to make an arrest or even secure a search warrant. A bizarre cat-and-mouse game ensues as Inspector Conway (Roland Culver) tries to pressure the killer into tipping his hand, which puts Anne in deadly danger. It all comes down to a race against time through London as all of the threads draw together, but around whose neck? ~ Bruce Eder, Rovi

John Ruddock
as Tramp
View All

Critic Reviews for Wanted for Murder

efficient and effective low-budget style, which makes good use of actual London locations and eschews anything overtly flashy

Film noir with a British bent.

...perfectly watchable (if palpably padded-out) from start to finish.

Audience Reviews for Wanted for Murder

There are no featured audience reviews yet. Click the link below to see what others say about Wanted for Murder!