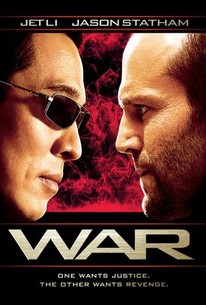 Critics Consensus: Jet Li and Jason Statham find themselves on opposing sides in the immensely boring War, which is full of clichés but short on action.

Critics Consensus: Jet Li and Jason Statham find themselves on opposing sides in the immensely boring War, which is full of clichés but short on action.

Critic Consensus: Jet Li and Jason Statham find themselves on opposing sides in the immensely boring War, which is full of clichés but short on action.

An FBI agent whose partner and family were killed by a notorious assassin sets out for revenge as the elusive triggerman sparks a sprawling gang war between the triads and the yakuza in the feature debut from prolific music video director Phillip Atwell. FBI sgent Jack Crawford (Jason Statham) is a man driven by vengeance. After his partner, Tom Lone (Terry Chen), and his family fell to bullets fired by infamous hitman Rogue (Jet Li), Crawford makes it his life mission to ferret out the slippery killer. Complications arise when it begins to appear as if Rogue has a mission of his own to carry out, and as triad boss Chang (John Lone) prepares for all-out war against yakuza boss Shiro (Ryo Ishibashi), Crawford and Rogue also come face to face as the secrets of the past emerge in a hail of gunfire. ~ Jason Buchanan, Rovi

A needlessly elaborate plot somewhat spoils the pairing of these martial-arts icons, but this sturdy B-movie thriller has enough style to overcome its formulaic trappings.

All together now: 'War! Hurgh! What is it it good for?'

What is it good for? Absolutely nothing.

Li and Statham (and the audience) deserve better.

The blithesome action and wacky characters of Jason Statham's previous martial arts flicks are nowhere to be found here.

An amalgam of every bland, run-of-the-mill action movie of the last 20 years.

It's inexplicable that the filmmakers haven't given the stars many opportunities to pull out their celebrated skills en route to their inevitable head-on collision.

Considering the extent of action/fight/chase/shootout and stunts, the film seems to drag a bit. But then I like my action films to have good stories and interesting characters.

wonderfully entertaining with some solid action sequences. the story holds together ok until the end, but when it falls apart, it crumbles into too many pieces to be of much value.

This is a very good and slick looking action flick, I thought it was gonna be a silly martial arts fest that goes straight to the video shop, but this is actually really good. It looks great, the action and stunts are gritty, real looking and believeable, unlike alot of Jet Li and Statham films. The plot is abit confusing here and there, lots of twists and revenge battles going on and the ending is alittle flat but the main twist is good. Very high body count and plenty of blood, with some lovely looking car chases for good measure, a surprising thumbs up.

Such a fun and rewarding face off movie between the greatest modern action stars, Jet Li and Jason Statham. It's a lot better than it should be and throws itself into the ranks of Face/Off and Universal Soldier. It's got double crossing, Yakuza assassins, corrupt cops and a lot of one-liners and action. It doesn't have the best ending, which sort've takes away from the rest of the movie. However, it's still really fun and more than you might expect. There's no cheesy elements and it can be taken seriously for the most part. If anything, it's Jet Li and Jason Statham together onscreen.