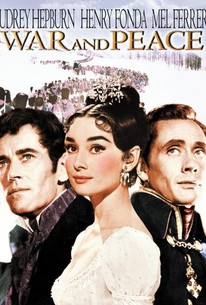 War and Peace is a commendable attempt to boil down Tolstoy's long, difficult novel into 208 minutes' screen time. In recreating the the social and personal upheavals attending Napoleon's 1812 invasion of Russia, $6 million was shelled out by coproducers Carlo Ponti, Dino de Laurentiis and Paramount Pictures. Some of the panoramic battle sequences are so expertly handled by second-unit director Mario Soldati that they appear to be Technicolor-and-Vistavision newsreel footage of the actual events. Still, the film falters dramatically, principally because of a lumpy script and King Vidor's surprisingly lustreless direction. In addition, the casting is wildly consistent: for example, while Audrey Hepburn is flawless as Natasha, Henry Fonda is far too "Yankeefied" as the introspective Pierre. Proving too long and unwieldy for most audiences, War and Peace died at the box office; far more successful was the epic, scrupulously faithful 1968 version, filmed in the Soviet Union.

May Britt
as Sonya Rostov

Gianni Luda
as Soldiers During the Rostovs' Exile

Alex D'Alessio
as Soldiers During the Rostovs' Exile

Alfredo Rizzo
as Soldiers During the Rostovs' Exile

Ina Alexeiva
as His Governess

John Douglas
as Officers Talking with Natasha During Exile

Robert Stephens
as Officers Talking with Natasha During Exile

Marianna Leibl
as Servant at Bolkonsky's

Savo Raskovitch
as Czar Alexander I

Critic Reviews for War and Peace

War and Peace can look intimidating on a library shelf, but this particular version is engaging, fresh and feels nothing like homework. An opportunity to see it in a theater like this doesn't come around often.

Alas, the human stories that Tolstoy told so significantly in the book are sketchy and inconsequential, despite the time devoted to them.

... the film is quite decent (although the script is fairly facile), mostly because the focus is largely on Natasha, and Hepburn brings a grace but also a sexiness to the role that she hadn't yet shown - especially with her scenes with Vittorio Gassman.

The film seems to me to be an acceptable approximation of a great novel -- one that will win thanks for King Vidor from a few hundred thousand new readers.

Henry Fonda possesses the mettle to fill the shoes of Pierre Bezukhov, but no amount of squinting will camouflage the sight of this 50-year-old American playing a 20-something Russian.

A stilted and ponderous epic about Napoleon's failed Russian invasion of 1812.

Audience Reviews for War and Peace

The gentle Pierre and the warlike Andrei experience Napoleon's invasion of Russia. This is not a film but a monument, a tribute, a love letter of Cliff's Notes to Tolstoy's novel. Though I must confess that I have yet to read the book, I can see lurking beneath the melodrama of the film Tolstoy's sharp characters and moral dilemmas. Tolstoy is so sharp a writer and such a master of inner monologue that no film could get inside the heads of these characters like his prose, and there lies the film's weakness. But despite its medium and the film's flaws, what lies beneath unfolds in fits and starts. And what fits and starts they are. The need for war but the reasonable repulsion of it, the dalliance of youth and the practiced certitude of adulthood, and the question of what makes militaries and states great are all themes that emerge if only in abstractions in King Vidor's epic film. Overall, this is an ambitious project that fails because it cannot capture all the goals its source material sets, but it succeeds sublimely sometimes.

Henry Fonda and Audrey Hepburn are a reason to watch, even if it is CRAZY long and boring for long stints.

Lumbering, stagnant version of an epic novel that could not possibly be covered in 3 1/2 hours. Miscasting is another major downfall of this production, Audrey Hepburn and Henry Fonda were great stars and very fine actors but they were the wrong ones for this film. Fine production design and beautiful photography do not an entertaining film make. A trial to sit through.

What a very long epic film classic. Really interested drama story of international conflict, spectacular adventure, gripping intrigue and tragic romance set against the sweeping backdrop of Napoleon's invasion of Russia. It's also a bit familiar to 1939's Gone with the Wind. I found out this took five years to make at enormous cost; it is a cinematic treasure.