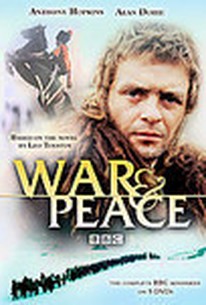 Of the many stage, screen, and television adaptations of Leo Tolstoy's mammoth novel War and Peace, this multi-episode British TV version is widely regarded as one of the most thorough and entertaining. The grim days of Napoleonic wars and the "Little Corporal's" ill-fated invasion of Russia were shown through the eyes of a large, interwoven group of protagonists, including the sensitive intellectual Pierre (played by a young Anthony Hopkins, who won the BAFTA Best Actor award) and the ethereally lovely Natasha (Morag Hood). Of the supporting cast, Alan Dobie as Prince Bolkonsky and David Swift as Napoleon were standouts. The 20 45-minute episodes of War and Peace first aired in the U.K. from September 28, 1972 through February 8, 1973. The series was syndicated in the U.S. courtesy of PBS beginning November 20, 1973. ~ Hal Erickson, Rovi

Donald Douglas
as Alexander I of Russia

Angela Down
as Maria

There are no critic reviews yet for War & Peace. Keep checking Rotten Tomatoes for updates!

There are no featured reviews for War & Peace at this time.