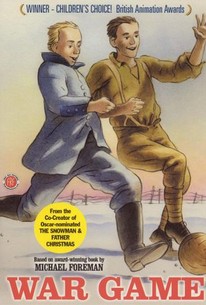 Based on the children's book by writer Michael Foreman and featuring the voice of Kate Winslet (Titanic, Eternal Sunshine of the Spotless Mind), this British animated adventure tells the story of three young chums who find themselves fighting the Germans in the First World War. As the battles rage, the young men on both sides of the conflict suddenly and unexpectedly strike up a soccer match on Christmas Day. ~ Matthew Tobey, Rovi

Iain Jones
as Will

Moving anti-war animation reminiscent of the old Tintin comics of the 1930's.