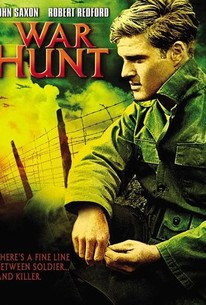 Robert Redford makes his big-screen debut in this off-beat war drama that tells the tail of a new replacement on the Korean front line. It is his first time in battle, and he comes all starry eyed and eager to prove himself a glorious hero. Obviously a greenhorn, the platoon commander takes the young private under his wing. All too soon, the youth realizes there is little glory in war. He also encounters a lone-wolf soldier whose lust for killing the enemy has turned him into a full-blown and deadly psychopath, leaving the private and his commanders to somehow stop him before he begins killing his own platoon-mates.

It had the same gritty feel to it as Sam Fuller's The Steel Helmet.

There are no featured audience reviews yet. Click the link below to see what others say about War Hunt!