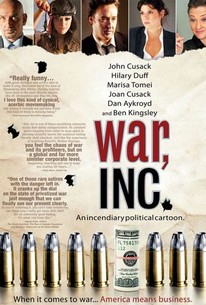 Critics Consensus: War, Inc. attempts to satirize the military industrial complex, but more often than not it misses its target.

Critics Consensus: War, Inc. attempts to satirize the military industrial complex, but more often than not it misses its target.

Critic Consensus: War, Inc. attempts to satirize the military industrial complex, but more often than not it misses its target.

An assassin posing as a trade-show producer fixes his crosshairs on a Middle Eastern oil minister while maintaining his cover by organizing a high-profile wedding in this satirical action comedy starring John Cusack, Hilary Duff, and Marisa Tomei. A private American corporation run by a former U.S. vice president (Dan Aykroyd) is occupying the war-torn nation of Turaqistan, but a powerful Middle Eastern oil minister is preventing them from taking total advantage of the situation. In order to gain a monopoly on the lucrative opportunities that Turaqistan has to offer, the CEO of the corporation hires an evenhanded hitman named Hauser (Cusack) to take the oil minister out of the picture. Now, in order to carry out the contract without a hitch, Hauser will pose as the corporation's trade-show producer. The stakes are high and the potential for disaster is evident, though if Hauser can successfully organize the wedding of Central Asian pop-star Yonica Babyyeah (Duff), he's got a good chance of pulling it off. But sexy and resourceful left-wing reporter Natalie Hegalhuzen (Tomei) is determined to uncover the truth about what's happening in Turaqistan, and the moment she does, this carefully constructed scheme will crumble like a house of cards. Joshua Seftel directs a screenplay co-written by Mark Leyner, Jeremy Pikser, and producer/star John Cusack. ~ Jason Buchanan, Rovi

John McLaughlin
as Himself

Montel Williams
as Voice of Jerry from GuideStar

Bashur Rahal
as Video Guy No.1

Vesilav Pavlov
as Video Guy No.2

Zahari Baharov
as Video Guy No.3

Krasi Simeonov
as Tamerlane Guard No.1

Besides its grating smugness, the picture pummels you with its political points until you want to kick it in the shin. There are a few laughs and a lot of embarrassing moments.

Surrounded by sententiousness and self-preening, Marisa Tomei manages to play a skeptical journalist with easy charm, but her efforts are doomed by the movie's ceaseless barrage of dumb bombs.

This John Cusack-driven exercise in scorched-earth political comedy is neither as dark nor as timely as intended, and certainly not as funny.

Despite flashes of comic inspiration and an abundance of anything-goes boldness, this well-intentioned but wobbly satire is a chaotic free-fire zone.

For critics of the war with an appetite for red meat, War, Inc. will prove filling, if not quite completely nourishing.

At its best, War, Inc. reaches the level of a biting-and courageous-political satire.

"War, Inc." transforms from a precise satire taking a scalpel to the absurdities of the war on terror to a bludgeoning sledgehammer.

For all the great performances, clever sight gags and relevant issues concerning the corporate take over of America, "War, Inc." is never all that it can be.

A few times, it hits its comic mark, but far more frequently, it gets distracted by hyperactive, irrelevant subplots.

The funny moments (some of them supplied by Joan Cusack and Ben Kingsley) aren't quite enough to make this a movie. It's a mess, but the sense of commitment is impressive, and sometimes exhilarating.

This absurdist political farce has its moments but requires a deft touch for satire ... perhaps no one could have made the uneven script work.

In the near future corporations rule the world rather than nation states and disputes are settled by a heavily armed "arbitrator" played by John Cusack. The combination of black comedy and extreme violence and the presence of the Cusacks and Dan Aykroyd will be familiar to anyone who has seen Grosse Point Blank. It's essentially a political satire, Turekistan being an obvious analogy for the events in the middle east; a kind of "Thank You For Smoking Guns". As political satire it has all the subtlety of a scud launcher, some of the physical comedy bordering on Zucker/Abrams territory, but it also has enough smart, witty and well observed dialogue to offend "patriots" everywhere and no doubt get everyone involved on the NSA's shitlist. The leads are all excellent, John and Marisa making a smart and sexy couple, Joan is hilarious as his company sidekick and Aykroyd once again supplies a memorable cameo. I couldn't help thinking it could've been a masterpiece if they'd shown a little more restraint, but the hit and miss comedy is on target far more often than off and it's nice to see an American comedy that's both intelligent and has something to say.

They bring the War Home at your Order!
One of the really...well how to describe this Movie? Oh yes Its political satire at its best.

it was Grosse Point with out the plot.

John Cusack returns to Grosse Pointe but this time in iraq i mean turkestan. A funny movie, well acted, but not as good as some of Cusacks other work.