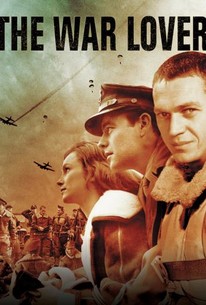 Buzz Rickson (Steve McQueen) is the gung-ho Air Force ace who thrives on being in the middle of any kind of battle. He is universally disliked, but respected by the pilots he commands due to his fierce fighting an leadership. His outward aggression hides his psychopathic inability to attain intimacy with woman. He and fellow pilot Ed Boland (Robert Wagner) both fall for a beautiful British woman named Daphne (Shirley Ann Field). The unit conducts routine bombing raids over Nazi Germany with B 17 fighter planes. Tension mounts after a mission when Buzz orders the crew to bail out and he attempts to bring the plane home on a wing and a prayer. The battle action is visually superb and expertly directed in this wartime drama.

Arthur Hewlett
as Vicar
View All

Critic Reviews for The War Lover

Audience Reviews for The War Lover

Not bad study of differing pyschologies that make up a flight unit in WWII. McQueen and Wagner are well cast and work well together. Shirley Anne Field is a very classy leading lady and the romance is well presented and doesn't interfer with the main story. The ending is unfortunately abrupt and hurts the overall feeling of the film.