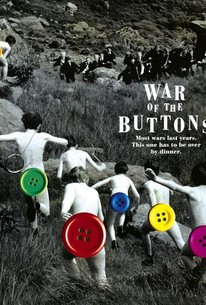 Two rival gangs of children battle out their differences in a unique manner in this is remake of the 1962 film. It is set in two neighboring villages, Carrickdowse and Bally during an unnamed era in a remote part of southwestern Ireland. Each town has it's own gang of children. The tale is told by Marie, a former Bally girl. The gang in Carrickdowse is very neat. They always wear their school uniforms with neckties. Their leader is Geronimo. The Bally kids are less genteel; they are often dirty and rambunctious. Fergus is their leader. The war begins when insults are thrown when the two gangs meet on a bridge. To retaliate the Ballys deface a church in the other town. Then they capture Geronimo and steal the buttons from his shirt. When the Carricks do the same to Fergus, the war of the buttons commences.

Donncha Crowley
as Police Sergeant No. 1

Maurice O'Donoghue
as Police Sergeant No. 2

Frank O'Sullivan
as Fisherman No. 1

Eamon Hunt
as Fisherman No. 2

Critic Reviews for War of the Buttons

There are no critic reviews yet for War of the Buttons. Keep checking Rotten Tomatoes for updates!

Audience Reviews for War of the Buttons

Very enjoyable, yet hard to find movie. I rented this many years ago, just on a whim. I was pleasantly surprised.

This is a movie from my childhood. A personal favorite. LOVE IT!

War of the Buttons Quotes