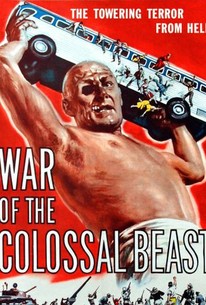 War of the Colossal Beast picks up a year after the end of The Amazing Colossal Man -- Joyce Manning (Sally Fraser), sister to the first film's 70-foot-tall Colossal Man, Lt. Col. Glenn Manning (Glenn Langan), believes that her brother is still alive, despite his fall off of Boulder Dam at the denouement of the first movie.Her hope is based on reports out of Mexico about a "very big man" attacking truckers and other passersby in a remote part of the country. As it turns out, Manning (played here by Dean Parkin, since Langan turned down the request to star in a sequel) is alive and hiding somewhere in the mountains, bigger than ever and suffering from serious brain damage, with a hideously deformed face that is covered in scar tissue and missing an eye. Every effort at communicating with the giant fails, and as things always transpire in movies of this sort (at least since the silent version of The Lost World), he breaks out of the place where he is being held and goes on a rampage.

Critic Reviews for War of the Colossal Beast

One of the weirdest and wildest of low-budget nineteen-fifties science-fiction movies...

The sequel is a similarly rote affair.

Audience Reviews for War of the Colossal Beast

I can't believe they made a sequel out of the Z movie The Amazing Colossal Beast. In the sequel, the team went to Mexico to try to stop the Colossal Beast, some rip off from King Kong ensured. It's sort of entertaining in its silly ways, the story was thin as ice.

Another film from the Samuel Z Arkoff Collection. Nothing more then a Drive In / Chiller theater Sci Fi Film of the 1960 Era. I remember this on scaring me to death each time I watched it, but I did watch it more then once growing up. 3 Stars

Sequel to The Amazing Colossal Man. Campy and fun but oh so bad. *NOTE: The last few seconds were shot in color which, regrettably, doesn't make the ending any more palatable.

A typical "giant man gets captured and then runs amok" affair

War of the Colossal Beast Quotes