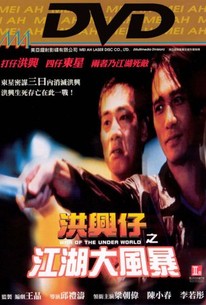 Herman Yau Lau-to spins this goo wak jai gangster yarn featuring Tony Leung Chiu-wai. The film opens with a gangland fight that breaks out at a screening of Young and Dangerous 3 -- which also happened to be made by this film's producers. During the fight, bumptious gangster Siu-chun (Jordan Chan Siu-chan) from the Hung Hing clan is about to be clobbered by Scum (Ngai Sing), a thug from the rival Tong Sheng gang, when he is saved by celebrated street fighter Hong Fei (Leung). Later, Siu-chun's journalist sister Tong (Carman Lee Yeuk-tung) becomes fascinated with Fei when the charismatic gangster takes her to an underworld drag racing meet. She eventually learns that Fei is the heir to the Hung Hing dynasty. Yet Fei quietly blames his father Hong Sheng (Ku Feng) -- and current don of the gang -- for the brutal deaths of his sister and mother. hen Sheng does die of a stroke, Fei's reluctance to take the reigns of power results is chaos on the streets.

There are no critic reviews yet for War of the Underworld (Xong xing zi: Zhi jiang hu da feng bao). Keep checking Rotten Tomatoes for updates!

There are no featured reviews for War of the Underworld (Xong xing zi: Zhi jiang hu da feng bao) at this time.