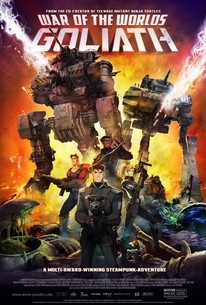 War of the Worlds: Goliath Photos

In a parallel universe, World War One is imminent as we follow the gripping story of human resistance fighters who march to battle against the second invasion of the Martians. In 1899, the Earth was attacked by ruthless invaders from the planet Mars. The Martians' 80 ft tall, heat-ray spewing, Tripod battle machines laid waste to the planet, but the invaders ultimately fell prey to Earth's tiny bacteria. Fifteen years later, Man has rebuilt his shattered world, in large part by utilizing captured Martian technology. Equipped with giant, steam-powered Tripod battle machines, the international rapid reaction force, is Mankind's first line of defense against the return of the rapacious Martian invaders. And return the Martians do. The rematch finds the multinational battle squad tripod "Goliath" on the front-lines of a vicious interplanetary offensive. This time the Martians are using even more advanced alien technology. In the crucible of combat, the young crew helming the mighty Goliath will be tested to the limits of their endurance and courage as they fight for Mankind's very survival under the onslaught of an implacable enemy. (c) Anderson

Critic Reviews for War of the Worlds: Goliath

"War of the Worlds: Goliath" is just a few cereal commercials shy of a pointlessly cartoon marathon - violent, messily drawn and lifelessly dragging.

Considering that the fate of humankind is at stake, "War of the Worlds: Goliath" is remarkably uninvolving.

War of the Worlds: Goliath isn't fabulous cinema, but it's still got a specific vision and a great voice cast, attributes that make it both distinctive and fun.

Cleverly, the animators rattle the frame on the tripods' exteriors to suggest the machines' Earth-shaking mass. That's pretty much the inventory of the film's "plus" column.

Audience Reviews for War of the Worlds: Goliath

There are no featured audience reviews yet. Click the link below to see what others say about War of the Worlds: Goliath!

War of the Worlds: Goliath Quotes