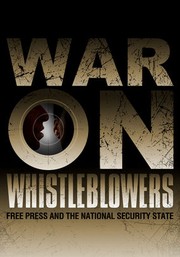 War on Whistleblowers: Free Press and the National Security State

Stephen L
November 14, 2015
Enlightening and informative - follow up with Citizenfour on HBO.

This documentary follows a small but interesting set of case studies of real whistleblowers who have been punished by the system in recent years.

Daniel Ellsberg was a whistle blower from the 1970s who provides perspective throughout the film.

In Iraq in 2006, our soldiers were dying due to the lack of armour on Humvees. An IED could take one out, and the military inside often died or were badly injured. Franz Gayl, Science and Technology Advisor to the Marine Corps in the Pentagon, became aware of this and brought it to the attention of his superiors. He championed the replacement of the Humvee by the safer MRAP, but was greeted with roadblocks. He went to USA Today to get leverage on the problem. He faced reprisals at work; his journalist contacts were threatened with lack of access. The Humvees were replaced, but Gayl was put on administrative leave for quite some time.

Thomas Drake: (former) Senior Executive at the (US) National Security Agency was the second whistle blower profiled. 'We do not spy on Americans,' was a phrase Drake heard at work. However, he started his job on 2001/09/11; thereafter, however, he noted huge breaches of this key charter element of the NSA. Massive amounts of information were being collected on US citizens living inside the USA. Drake exposed portions of this process. His life was massively invaded in response by the FBI. The Justice Department threatened him with the Espionage Act, and specific charges that could potentially land him in jail for the rest of his life.

Michael DeKort: (former) Lead Systems Engineer: The Deepwater Program, for the US Coast Guard was the third to be profiled. DeKort brought to the light of day two major problems with the Coast Guard fleet's upgrade: radios with non-waterproof circuitry, and hulls that were overly susceptible to buckling. DeKort used YouTube to spread the story, and it eventually found its way to 60 Minutes. DeKort stayed out of jail.

Thomas Tamm: (former) Attorney in the Justice Department was the fourth to be profiled. He was in the Office of Intelligence Policy and Review within Justice. He talked to victims of the 9/11 terrorist attacks. His group applied for judicial warrants to listen in on persons in the United States who were thought to be connected to terrorists. His group worked with the FBI which had developed the 'probable cause' for these warrants. Some cases were treated differently, however.

All of these whistle blowers suffered in their professional lives. All of them tried to go through official channels, where they were largely blocked. I specifically liked the point made that the recent administrations leak secret information as a matter of policy, and none of those leakers go to jail.

How did these stories pan out? What are the implications for other potential whistle blowers?

Cinematography: 8/10 Fine for a documentary.

Sound: 8/10 Voices and words were clear enough. Incidental music was not overbearing.

Screenplay: 8/10 The telling of the four stories were well packaged.

Crusader .
January 27, 2014
Very timely and compelling documentary made possible by a well-respected journalist.
Page 1 of 1