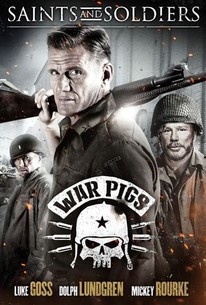 Disgraced World War 2 Army Captain Jack Wosick is given the opportunity for redemption when asked to lead a rag-tag unit of misfits known as the War Pigs on a secret mission to go behind enemy lines to uncover and capture a Nazi developed Super Weapon the V3, a massive artillery canon that would give the Nazis an insurmountable advantage against the Allies. With the help of Captain Hans Picault, a German Anti-Nazi serving with the French Foreign Legion and Colonel AJ Redding, a battle hardened WW1 veteran, Jack must train, lead and earn the respect of his new squad to become a functioning reconnaissance unit.

Hoping to revive a classic war film ambiance, the endeavor is simply too confined and shiny to feel knuckle-crackingly retro.

I'm a fan of Luke Goss, but if you're going to watch War Pigs, you may as well skip to the last act, 'cause there is *nothing* worth watching in the first 55 minutes. Prior to this mark, War Pigs is boring to the point of wanting to switch it off, and honestly, that feeling comes and goes even after. Maclain Nelson is honestly the best War Pigs has to offer, and he's on screen for all of about three minutes. Which is far longer than the cover-touted Chuck Liddell and Mickey Rourke appear. It ended better than I had feared, and worse than I had hoped, at the end of the day, War Pigs is ultimately missable.