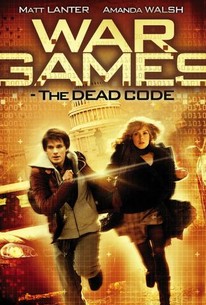 A brilliant hacker inadvertently sets the wheels of World War III into motion after hacking into a restricted online gaming network and learning of a national defense system designed to identify fledgling terrorist cells in this belated sequel to the popular 1982 thriller. There isn't a system on the planet that Will Farmer (Matt Lanter) can't hack into with a little work, so when he manages to breach the security of a restricted online gaming network known as R.I.P.L.E.Y., he's convinced that his skills are still as sharp as ever. But what Matt hasn't realized is that R.I.P.L.E.Y. is actually a highly classified government defense system, and he's just become its next target. Now the system knows his identity, and his entire hometown faces the threat of an automated military response. In order to clear his name, Matt will have to beat the computer at its own game. The game turns deadly, however, when R.I.P.L.E.Y. suddenly raises the stakes, threatening Armageddon in a time when the world is already dangerously unstable. With no time left to lose before the missiles start to fly, Matt must now use his formidable hacking skills to save the world from the government's own hopelessly flawed doomsday device.

Matt Lanter
as Will Farmer

Keeps the formula topical, replacing Soviet aggressors with cyber-savvy terrorists, but the renovations end there.

As far as direct-to-DVD sequels go, you can do a lot worse

casual moviegoers won't get the in-jokes and won't care about the plot.

I loved the original Wargames and found this one just as enjoyable. This one rehashes the basic premise of the first movie, but in a new and modern way (such as terrorists) and added some 'Enemy of the State' like surveillance and pursuit scenario. Plot: Philadelphia high-schooler Will Farmer (Matt Lanter) plays a computer game that simulates a terrorist attack, and Ripley, the super government computer with a sexy voice, designed to profile potential terrorists, tracks him down because he beat five levels in 15 minutes, this makes Ripley believe that he is a high level terror threat. Professor Falken and Joshua (WOPR) make reappearance in this movie and I enjoyed the confrontation between Ripley (Alien, anyone) and Joshua. If you like the science-techno-computer-hacker-surveillance type of action movie, be sure to check this one out.

A nice straight to dvd movie. Paid nice homage to the original. This was a sequel and not a remake and did really nothing to diminish the original movie.

I think my IQ dropped a few points watching this one. Overly complicated story, bad acting, (with the exception of Amanda Walsh, who was decent), not even a scratch on the original. Best avoided.

This is loosely based on the ideas of the original 80's hit . It's set in the modern day as we see a base in Afghanistan get destroyed by a UAV right at the start. The whole "Decontamination" plot & idea are totally unbelievable. The idea of the Nuclear exchange to make RIPLEY realise what RIPLEY's doing won't work is yet another nod back to the original movie. Their cop-out at having RIPLEY repeat Joshua's exact same words form the end of the original movie just goes to show how many original ideas they were unable to come up with. If you want to point fingers for bad & stolen ideas the men to blame are Randall Badat and Rob Kerchner. This is an awful movie and is best avoided.