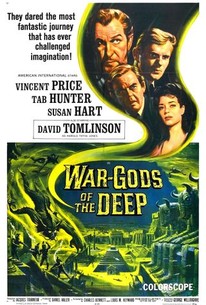 War-Gods of the Deep Photos

Loosely based on a poem by Edgar Allan Poe, this fantasy adventure set on the Cornish coast in Victorian England, has a group of people discovering a lost city located upon the ocean floor, inhabited by strange fishmen under the command of a deranged sea Captain.

Critic Reviews for War-Gods of the Deep

It's one of the blander of these fantasy forays, perhaps due in part to the minimum of action and monsters.

A bit of a disappointment.

Audience Reviews for War-Gods of the Deep

The story is supposed to be based on a poem by Poe, but it's very loosely based on a very short poem, so it's really a story they came up with for the movie. A lot of it is low budget and somewhat stupid, but it's also a cool adventure movie with Price as the villain. I enjoyed it.

Fantastic title for a film (the War-Gods one) but alas the film can't live up to it. The 60's saw so many films in this genre, these colourful fantasy tales which tend to involve mysterious worlds, lands or cities, the genre was flooded!. But its so very clear that this film was...how shall I put this...a complete copy/rip off of the Disney classic '20,000 Leagues Under the Sea'. The plot is so flipping stupid, it really does feel like they are stretching the boundaries of artistic license within the realms of fantasy with this one. On the coast of Cornwall (a county on the far south west tip of the United Kingdom) stands a mansion, a mansion which has stood for along time, but when an American turns up he conveniently discovers some secret passages that eventually lead to a whole under the sea city...as you do. Within this city/world of undersea caves, lives Vincent Price and his scurvy crew of shipmates. They have all been down there for centuries because somehow there is some kind of oxygen/gas imbalance down there caused by the volcano or something. So basically they are all stuck down there because if they reemerge they will age rapidly and die. So basically the whole film is about the two main male characters delving deep into this undersea world to try and rescue the damsel in distress. Yep she was kidnapped by the dastardly Price because he thinks she is his long lost wife or something, oh and Price also controls these humanoid 'Creature from the Black Lagoon' type errr...creatures, somehow. Oh! and I almost forgot, the whole undersea world is gonna be destroyed by a big undersea volcano which is due to erupt, there's always a volcano due to erupt in these films. The plot makes no sense whatsoever, we don't know why Price's character believes this woman is his long lost wife or why he wants her. No explanation for the gillmen, no real clue about Price's character accept he used to be some captain from centuries ago who smuggled stuff. We know how they got trapped in the undersea city but odd how no one else managed to find it also. I might add we only see this city from a distance, Price, his men and the heroes seem to be in some caves overlooking the city, we never actually venture into it or see any of its inhabitants, if any are left. Almost the entire film is spent down in these undersea caves watching Price pace around in his natty sea captain attire whilst he explains tonnes of plot exposition. Nothing else actually happens! we do eventually get a battle sequence in the sea when everybody dons '20,000 Leagues Under the Sea' diving suits. Dunno how they got away with that, its so obviously copyright infringement. But this sequence must go down as one of the most dull uninteresting 'action' sequences ever. Watching people lumber around very very slowly on the seafloor, obviously no dialog, no clue who is who, no clue what's going on, the odd mug shot of the actors in their diving helmets all accompanied by an uninspiring musical score. This went on for about ten minutes!! talk about filler!. This film really does feel badly written and badly executed. Clearly trying to capitalize on the Nemo adventure from Disney with that traditional period look and virtually copying every other idea. The stella cast can't save the film at all, its nice listening to Price talk but even that isn't enough. David Tomlinson has obviously been stuck in there again to try and capitalize on his past Disney fame. It sounds awesome but that's far from the truth I'm afraid, very disappointing adventure film with absolutely no adventure in it!. The best part of the entire film is the brief sequence where Price's character reaches the surface and instantly begins to age and wither away, reduced to a prune-like mummy as his words echo and fade one last time.

What Surprised me about this movie is it's based on a Edgar Allen Poe Short Story. And of course any story written by Poe could have no one other then Vincent Price Play the bad Guy. This movie with the backgrounds and the colors reminded me of 20,000 Leagues Under the Sea. The star of the show was the cochin bantam hen named Henry, Don't know any other movie who got in the credits. Little to much Rubber on the Sea monsters. 3 Stars and that?s a stretch, In my collection cause it came as a MGM Midnight Double.

War-Gods of the Deep Quotes