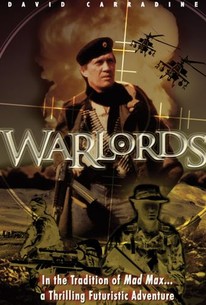 In a future where the planet Earth has been poisoned by radiation, a fearless warrior named Dow (David Carradine) stands as mankind's last hope against a tyrannical ruler known only as The Warlord (Sid Haig) and his murderous band of mutant warriors. Accompanied only by the beautiful but fierce warrior Danny (Dawn Wildsmith) and the unpredictable Ammo, Dow attempts to conquer the desert savages who seek to rule the world. By summoning the courage and resourcefulness that will allow the fearless trio to do battle with an army of relentless killers, they make one last heroic attempt to save the world or die trying.

There are no critic reviews yet for Warlords. Keep checking Rotten Tomatoes for updates!

There are no featured reviews for Warlords at this time.