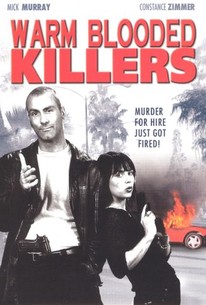 We all have our own personal issues to deal with, and for baseball card aficionado and hit man John Portenza (Mick Murray) it's his quick tempter that often gets him in hot water. With the help of his younger sister, Vicky (Constance Zimmer), John has quickly risen to respectable ranks in the assassin-for-hire business, and like any older brother John is protective of his little sis. When John learns that Vicky's boyfriend Dutch has taped the couple's lovemaking sessions and sold the tapes to cable television, his anger gets the best of him and he does what comes naturally to his sister's now ex-boyfriend. Little did John know that Dutch was actually the godson of his own boss, Vince (Carmen Argenziano), and when Vince enlists the help of John and Vicky in rubbing out the man he believes responsible for Dutch's demise, the duo soon realize that they're no longer employees -- but targets!

There are no critic reviews yet for Warm Blooded Killers. Keep checking Rotten Tomatoes for updates!

There are no featured reviews for Warm Blooded Killers at this time.