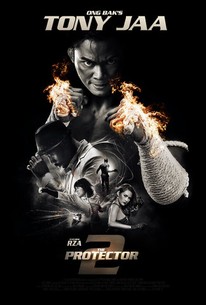 Boss Suchart is the influential owner of a major elephant camp. When he was murdered in his own home - the killer delivered three fatal blows on his body - all evidence points to KHAM (Tony Jaa), who was present at the crime scene and was seen with the victim the moment before he died. Kham is forced to run as the police launch a pursuit. Meanwhile, the twin nieces of Boss Suchart (Jija Yanin Wismitanan and Teerada Kittisiriprasert) are out for revenge. But luck is on Kham's side when he runs into Sergeant MARK (Mum Jokmok), an Interpol agent sent to Thailand on a secret mission. As Kham is hunted by several parties, he's also desperately searching for KHON, his elephant, whose disappearance is involved with Boss Suchart's death. In another twist, Kham is drawn into an underground fighting ring run by LC (RZA), a crime lord who's obsessed with collecting top-class martial artists from around the world. LC's fighters are branded only by numbers, such as the lethal, beautiful TWENTY (Ratha Pho-ngam) and the diabolical NO.2 (Marrese Crump). These fighters are ordered to defeat and capture Kham for a special mission that LC has in mind. A sequel of the global smash-hit The Protector (Tom Yam Goong), THE PROTECTOR 2 is an extreme fight movie, an endlessly intense, nerve-racking film full of fists, elbows, kicks and daredevil stunt scenes and amazingly choreographed fighting moves that will pump hot blood through the body of all action fans.(C) Magnolia

Anton Kalinitchenko
as Thirty One

John Dang
as Master of Ceremonies

If you thought the higher profile might have prompted Jaa to up his game, prepare to be disappointed.

Think about how bad the acting and plotting have to be in order to distill the impact of a Tony Jaa battle scene. If you know a little about Tony Jaa, that's kind of hard to imagine. I know. But trust me. Or don't.

Again with the elephant?

It's a shame to see both actor and director play things so safe.

Cheese is just about the only thing The Protector 2 has going for it.

The bigger The Protector 2 gets, the further it gets away from Jaa's basic appeals [...] Clearing a room flush with faceless bad guys is what Jaa does, but otherwise, less is more.

The story is still wildly juvenile, but the BMX assassins are back, along with the insanely destructive knee lunges and elbow strikes and lengthy martial arts face-offs.

Highly enjoyable, Tony Jaa's return could become a cult classic - but for all the wrong reasons...

Do yourself a favor and stick with the original.

Stephen Danay
Under the Radar

Sure, it's silly, but it's also wildly entertaining and sprinkled with some nice emotional beats. As long as Tony Jaa keeps losing his elephant, we'll keep showing up to watch him track it down.

It may not be the kind of film for which Tony Jaa will one day be remembered, but The Protector 2 is at least consistently fun.

Uh oh. Where have you been Tony Jaa? I swear I heard something about his withdraw from society and time away from the movie business, but this might be one of those times he should have stayed hidden. From what I remember about the first film, there were a few good fight scenes, decent editing and sub par acting. When you take nearly all those things and throw them out the door and add horrible dialogue, acting and cinematography on top of that, you have a disaster. A laughable disaster. It was so obvious in some of the fight scenes how slow and calculated certain punches were. RZA is awful, but he must feel like he needs to add his stamp on any martial arts flick as the bad guy. Perhaps he is just having fun in this funny movie. And the main story being about an elephant's kidnapping? There just wasn't anything substantial in this film.

Back in 2003 Tony Jaa (or Panom Yeerum in Thailand) starred in the bone breaking martial film "Ong Bak" becoming an international sensation. Drawing comparisons to many legendary martial artists such as Donnie Yen, Jet Li, and most evidently Jackie Chan. Unlike those he was compared to Tony Jaa success didn't lead him in the right direction. Every new film Tony Jaa starred in he failed to recapture the quality of "Ong Bak". His films gradually kept getting worse and dull with the occasional out of place goofy moment (in "Ong Bak 3" Tony Jaa magically gains the power to reverse time). Now with a resume of mostly forgettable films Jaa only guarantee for success is to turn his only original film into a franchise. Copy and pasting have never been so wrong before in a sequel serving as a "Best of Moments" from Jaa previous films. The Protector 2 sees Kham's pet elephant has being abducted (again) and he must fight anyone in his way to find him (again). Usually it would take longer for a film plot to not give a damn about the story, but the premise spoils that since it's the same exact premise from its predecessor. Although unlike its predecessor where there was some essence of story if sloppy had a complete narrative. Not here as quickly as Kham elephant is kidnapped it goes in a hurry to get to the action. Attempting to justify having even less plot this time it throws politics between two warring countries in the beginning of the film which has little relevance in the plot. Around reaching the twenty minute mark you'll have to endure one giant set piece that last around twelve minutes. This single action scene has Kham fighting motorcycles hooligans on top of a roof and eventually getting chased across the city surviving one over the top scenario after another. If it sounds like I'm skipping on plot details it's because there is barely any sufficient material for a story. It's basically a series of excuses for action scenes even if the context is not strong enough to support it. As for characters they remain the same not evolving in any noticeable way. There's no story to be found here. Just nonstop action in the worst way possible. Plot has never been a strong point in most of Tony Jaa films (or Thailand action films in general) and the action fares no better either. The main problem being dodgy CG and green screen that stick out. Doggy effects lessen the impact of fight scenes that would have been cooler to seen done in a practical manner. What could have been a highlight seeing Tony Jaa fight in a burning building ends looking like unfinished test footage for a video game. Fight choreography is so so. None of the fight scenes contain a sense of brutality. As oppose to the original where Tony Jaa impressively performed a four minute fight scene in one take in this film there's no effort to out do that accomplishment. All the fights scenes require the actors to jump around their location like rabbits. Often times resembling a cartoon (there's a fight scene in a subway in which Jaa's opponent gets the power to conduct electricity after dipping his shoes in water). Tony Jaa performance is so so. Not really having to rely much on his acting chops he serves his main purpose of doing stunts and fighting. While it is unnecessary to see him perform a stunt in first person view Jaa certainly knows how to stage a stunt. As for his fighting it remains simple though he moves quickly as always has showcasing impressive physical abilities. JeeJa Yanin suffers the same fate as Jaa. Although Yanin has proven she can act her role here only requires her to fight, fight, shout, and fight. Actually she spends most of the film getting beaten up by baddies until the finale. Petchtai Wongkamlao (who seriously has appeared in most of Jaa films) serves the same purpose in comedy relief. Once again due to the nature of the script Wongkamlao doesn't get many moments to do comedy, but at least he has plenty of dramatic scenes which are wasted too. Marrese Crump only job is to look mad and fight not requiring to do much. RZA on the other hand attempts to act though he never sells a single line. He never gets into his character nor is the allusion of him being an actor disappears. The Protector 2 provides more of the same thin plot rushing to get to its many overabundant action scenes. Unlike the original it doesn't contain anything as memorable leaving you with an action film if seen even with no brain cells is difficult to enjoy the absurdity that occurs. Tony Jaa is a talented man who knows how to fight and no doubt his fans will continue to see him regardless what the quality of the film is. However, Tony Jaa should be taking more risk and attempting something new because if not he'll end up in the same place as Steven Seagal who to this day uses his same old tired formula.