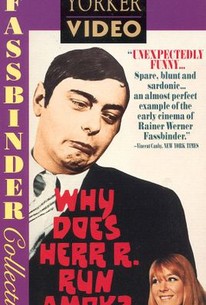 A technical designer enjoys a comfortable life with his wife and child. He has the approval of his boss and is in good health except for smoking too much according to his doctor. His wife is visited by a girlfriend one Sunday afternoon. The man is bored watching television and grabs a chandelier and kills the conversing women and his child. In a chilling display of nonchalance, he contemplates his own death by hanging in this disturbing feature. This film was the fourth for director Rainer Werner Fassbinder. ~ Dan Pavlides, Rovi

Amadeus Fengler
as Their Son

Fassbinder and Fengler opt to impress upon us a sense of almost unbearable tedium, a strategy so effective that, when drama arrives in the film's closing minutes, the eruption of violence feels like a kind of relief.

With a sardonic, scalpel-like technique, Rainer Werner Fassbinder and his co-director, Michael Fengler, calmly and gleefully flay the West German version of the American dream.

A revealing demonstration of how the style of a Fassbinder film becomes its subject.

Fassbinder navigates carefully between mockery and empathy, heightening the interior drama with his superior staging.

The movie is almost devoid of action and the characters are so long-winded and boring, one wonders if the cast knew the camera was running.

Despite not being as well known as some of his later masterpieces, Why Does Herr R Run Amok? makes for an ideal introduction to the expansive oeuvre of Rainer Werner Fassbinder.

A dark and bitter work that is difficult for some viewers and fascinating for others.

'Its condemnation of the acceptance of life as determined by societal convention is so strongly felt that the extremity of the finale is...as encouraging as it is disturbing.'