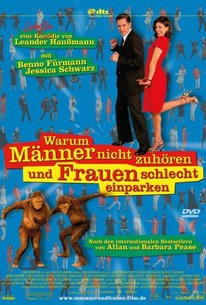 A few skirmishes from the ongoing battle between men and women are documented in this romantic comedy from Germany. Jan (Benno Fuermann) and Katrin (Jessica Schwarz) are a couple who literally met by accident -- attorney Jan was on a date with a woman he'd just met, Melanie (Annika Kuhl), when publisher Katrin bumped her car into Jan's, scraping the paint and sending him into a rage. While Melanie soon found herself infatuated with Jan's friend Ruediger (Matthias Matschke), Jan and Katrin's argument was the first step in a relationship that finds them living together two years later. While Melanie and Ruediger are happily married, things aren't quite so rosy for Jan and Katrin -- his head has been turned by Angie (Nadja Becker), a sexy if intellectually challenged woman working at his office, while Katrin has struck up a cozy friendship with handsome writer Jonathan Armbruster (Uwe Ochsenknecht). As Katrin ponders an offer from Jonathan to join him on a business trip to the United States, Jan wonders if he should act on his desires for Angie and Ruediger begins getting cold feet as Melanie discovers she's pregnant with the couple's first child. Warum maenner nicht zuhoeren und frauen schlect Einparken (aka Why Men Don't Listen And Women Can't Park) was inspired by a successful series of self-help books by Allan & Barbara Pease; an American film also drawn from their books is expected to be released in 2008. ~ Mark Deming, Rovi

There are no featured reviews for Warum Männer nicht zuhören und Frauen schlecht einparken at this time.