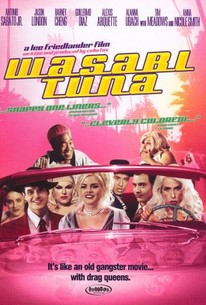 A couple risks their lives in the name of all things fabulous in this comedy of errors, set against the backdrop of West Hollywood's annual Halloween Parade. Wasabi Tuna's title refers to the ho-hum sushi costumes that boyfriends Harvey (Barney Cheng) and Evan (Jason London) have dreamed up for themselves and their friends to wear to the big bash. But when their sassy pall Emme (Alanna Ubach) offers up another suggestion -- that they dress as hardcore East L.A. gangstas -- the couple jumps at the chance. However, when the boutiques on Rodeo Drive don't yield the authentic ghetto fashions they need, the friends hit the streets to beg, steal, or borrow what it takes to "look the part," and end up the unwitting carriers of an illegal cache of gang weaponry. Co-starring Antonio Sabato Jr., SNL funnyman Tim Meadows, and reality-TV widow Anna Nicole Smith (playing herself), Wasabi Tuna received a limited West Coast release in the spring of 2004.

Anna Nicole Smith
as Herself

Johnny Williams
as Wally the Cook

A shaggy dog tale in more ways than one.

It's the game cast ... that, bolstered by some sharp one-liners, sight gags and a blithe lack of self-importance, keeps aloft this lightweight camp comedy written and directed by Celia Fox.

There are no featured reviews for Wasabi Tuna at this time.