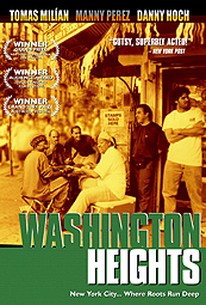 Carlos (Manny Perez) is a talented artist who draws comics for a living. He's desperate to move out of his Washington Heights neighborhood. His girlfriend, Maggie (Andrea Navedo) feels more connected to the neighborhood. She's not so eager to leave. Carlos's best friend, Mickey (Danny Hoch), works as a super in the building his father owns, but he dreams of being a professional bowler. He's scheming to raise three grand to enter an open tournament in Las Vegas. Carlos's father, Eddie (accomplished Cuban-born actor Tomas Milian, who starred in Michelangelo Antonioni's Indentificazione di una donna), owns a neighborhood grocery store, and is well-liked in the neighborhood for his friendly way of doing business. Despite his advanced age, he's also a ladies' man, and was so even before Carlos's mother passed away. His philandering ways account for a lot of the tension between father and son. Carlos wants to draw his own comic book, but his boss, David (David Zayas) tells him that while he's got technical ability, his work is soulless. But Carlos's plans for the future are disrupted when Eddie is shot and critically wounded during a robbery at the store. Carlos resentfully takes care of his ailing father, and runs the store until Eddie can go back to work. Carlos's growing understanding of his community, and his father's importance to it, is reflected in his work, and he has a creative breakthrough. Meanwhile, Mickey's moneymaking schemes get him into trouble with Angel (Bobby Cannavale), Maggie's gangster brother. Washington Heights was directed by Alfredo De Villa, who wrote the script with Nat Moss. Novelist Junot Diaz (Drown) wrote additional dialogue. The film was shown at the 2002 Urbanworld Film Festival, and at the 2002 Tribeca Film Festival, where it received a Special Mention.

Fernando Baez
as Man on Street
View All

Considering the money this film cost to make, its short shooting schedule, and its unpandering ethnic content, it's a triumph.

Buoyed by strong performances from Perez and Miami-resident Milian, Washington Heights overcomes the familiarity of its premise through its passion and conviction.

Washington Heights is sloppy and often undernourished, but it convincingly creates a neighborhood throbbing with activity and caring.

Deserves a wide audience hungry for sympathetic, three-dimensional people caught up in something bigger than themselves.

Washington Heights may not always be great, but director Alfredo de Villa lights an undeniable fire in the movie's belly.

may inspire some to get off at 191st street

A solid effort by the talented de Villa in his directorial debut.

The performances are uniformly fine, with Perez showing a heavy amount of presence and complexity.

The film has an urgency and assured street-level realism that is rare for any film, let alone one by a first-time director.

An affecting reworking of a traditional story, told with passion, sensitivity, and a little clumsiness.

There are no featured audience reviews yet. Click the link below to see what others say about Washington Heights!