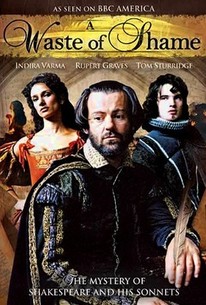 Inspired by William Shakespeare's collection of 154 sonnets, A Waste of Shame attempts to solve a mystery 400 years in the making by speculating on the identities of the Fair Youth (Tom Sturridge) and Dark Lady (Indira Varma) who played such a prominent role in the Bard's most popular works. As Shakespeare (Rupert Graves) approaches mid-life, he finds himself drawn into a treacherous love triangle. The depravity in 16th Century England at an all time high and the plague playing on everyone's fear of death, dejected poet Shakespeare filters his ennui into some of the most scathing, bitter sonnets ever written. ~ Jason Buchanan, Rovi

Critic Reviews for Waste of Shame

There are no critic reviews yet for Waste of Shame. Keep checking Rotten Tomatoes for updates!

Audience Reviews for Waste of Shame

I'm torn by this film. I loved seeing and hearing top flight British actors doing Shakespeare. What I didn't love was the story itself. I didn't buy it. So I can't slam it for poor quality, because it wasn't poor. The acting, directing, cinematography, etc., were all top flight. Where I take issue with this property is in what it had to say. Since I don't buy it or agree with it, it is hard for me to recommend ti.