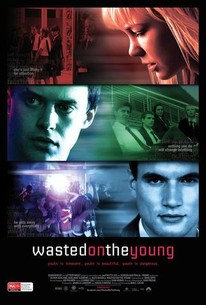 Wasted on the Young Photos

A young woman finds her reputation is at stake when she refuses to date a charming bully in this intelligent teen drama from Australia. Xandrie (Adelaide Clemens) is a smart, pretty girl who is attending an exclusive private school favored by wealthy, upper-class families. Xandrie is infatuated with Darren (Oliver Ackland), a handsome but quiet boy with an interest in computers, but Darren's step-brother Zack (Alex Russell), who is at the top of the school status ladder, has his eye on her. Zach is used to getting what he wants, often with the help of his loyal sidekicks Brook (T.J. Power) and Jonathan (Tom Stokes), and when Xandrie rejects his advances, he doesn't take it well. Soon Xandrie finds herself the target of a campaign of rumors and vicious gossip, largely spread through online social networking, and the war of words takes an especially ugly turn that could leave Xandrie scarred for life and turn Darren against Zack. Wasted On The Young was the first feature film from writer and director Ben C. Lucas. ~ Mark Deming, Rovi

Kym Thorne
as Karenn
View All

Critic Reviews for Wasted on the Young

Wasted on the Young's pulsating soundtrack, immediate direction by first time filmmaker Lucas ... and Leanne Cole's hectic editing all lend the film a vibrancy that is sorely lacking in a lot of cinema these days.

Visually impressive, but the script needed a big angry red pen taken to it. Oh, and does every character need to shuffle around like they're in a My Chemical Romance video clip?

Wasted on the Young is a slick and striking film that presents a disturbingly recognisable world of plutocratic rule in the dark heart of Australian society.

This dramatic tale of that sense of entitlement that some people have to get away with any violation, and revenge via modern media is an absolute winner for me.

Wasted on the Young packs an emotional and visual punch, yet its lack of likeable characters and inherently despairing attitude makes this one cynically violent trip back to the school yard.

I'm not convinced that there's a clear message but this is still a film worth your attention. The editing is sharp and the cinematography is striking.

Sadly the plot falls short of its director's aspirations, and given his obvious filmic talents this is all the more disappointing.

The film transcends the trappings of a traditional teen parable. It becomes something closer to Rian Johnson's masterful Brick, in which a bunch of film noir archetypes were anachronistically transported into a high school, just for the hell of it.

Audience Reviews for Wasted on the Young

Stylistic Australian thriller of riverting and thought provoking atomosphere. This is original enough to keep me on the edge of my seat, and once again its another extraordinary debut for an Australian talent

Wasted on the Young Quotes