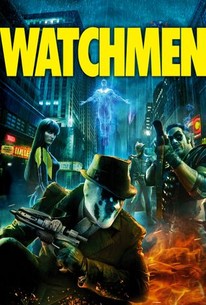 Critics Consensus: Gritty and visually striking, Watchmen is a faithful adaptation of Alan Moore's graphic novel, but its complex narrative structure may make it difficult for it to appeal to viewers not already familiar with the source material.

Critics Consensus: Gritty and visually striking, Watchmen is a faithful adaptation of Alan Moore's graphic novel, but its complex narrative structure may make it difficult for it to appeal to viewers not already familiar with the source material.

Critic Consensus: Gritty and visually striking, Watchmen is a faithful adaptation of Alan Moore's graphic novel, but its complex narrative structure may make it difficult for it to appeal to viewers not already familiar with the source material.

300's Zack Snyder brings Alan Moore and Dave Gibbons' critically acclaimed comic book Watchmen to the big screen, courtesy of DC Comics and Warner Bros. Pictures. Set in an alternate universe circa 1985, the film's world is a highly unstable one where a nuclear war is imminent between America and Russia. Superheroes have long been made to hang up their tights thanks to the government-sponsored Keene Act, but that all changes with the death of The Comedian (Jeffrey Dean Morgan), a robust ex-hero commando whose mysterious free fall out a window perks the interest of one of the country's last remaining vigilantes, Rorschach (Jackie Earle Haley). His investigation leads him to caution many of his other former costumed colleagues, including Dr. Manhattan, Night Owl (Patrick Wilson), Ozymandias (Matthew Goode), Sally Jupiter (Carla Gugino), and her daughter, The Silk Spectre (Malin Akerman). Heralded for bringing the world of superheroes into the literary world, Watchmen gave the super-powered mythos a real-life grounding that had been missing in mainstream comics to that point. The film adaptation had languished in one form of development hell or another for years after the book's release, with various directors on and off the project, including Terry Gilliam, David Hayter, and Darren Aronofsky, as well as Paul Greengrass, whose eventual dismissal stemmed from budget conflicts with the studio. ~ Jeremy Wheeler, Rovi

Jeffrey Dean Morgan
as The Comedian

Nhi Do
as Vietnamese Girl

When given a great story and told that his job is to simply adapt it, Snyder more than rises to the occasion.

The only way to truly adhere to Alan Moore's vision of Watchmen would be to not make the movie in the first place.

Watchmen isn't your typical caper flick filled with kickass effects and gunfire and no premise.

Watchmen the movie provides ample evidence that more is more, but less might have been closer to Moore in spirit (that is, anarchic, witty and compelling).

If you haven't read the source material I think you're going to dislike it even more than I did. So yeah, it's sort of bad news around here.

Snyder's tongue in cheek graphic novel adaptation gets the most of it right faithfully, from two dimensional feel of the imagery with new age-y primary color-palette to Alan Moore's cynical exploration of the ugly side of Humanity.

The story is difficult to follow, the dialogue is both juvenile and pretentious, the acting is thoroughly uneven, the look and feel of the film are essentially without character or personality, and its social outlook is disoriented at best.

There's no shortage of nudity and graphic bloodshed as the fate of the world rests on the shoulders of psychopaths.

Better than expected but too often falling short.

If Watchmen doesn't earn comic-book movies the utmost respect, nothing ever will.

The essence of what made [Alan] Moore's tale a work of genius is up on the screen for all to see, and it looks phenomenal.

Pretty rich and involving superhero tale that happens w/o the prerequisite bad guys but (as in the comics of old) with the heroes struggling with one another in an alternate universe from our own. Big fun.

One of my favorite superhero films. Dr. Manhattan was awesome! Ozymandias is a genius but sort of mystery to me. Rorschach sees the world a little too black and white for my taste but I gotta love his tenacity. Of course, Silk Spectre and Night Owl are my favorites.

I had never read the graphic novel till about a year and half ago. I had really missed out on something awesome. Now for the movie it was not disappointing in any way to me. The changes being only a one time reader of the graphic novel I didnt notice too much. There were many parts though from the novel that jumped right out at me and that was impressive. I thought as a whole it was a very well done and solid movie. Darker than most superhero flicks, as the comic was darker and changed the way comics were forever.