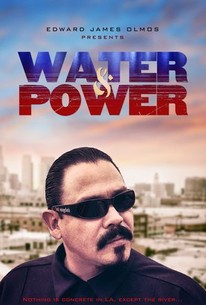 This is the Facebook page of Water & Power, a Modern Noir on the streets of LA. Twin brothers nicknamed "Water" and "Power" from the hard scrabble Eastside streets of Los Angeles rise like prince's through the city's political and police ranks to become players in a complex and dangerous web of the powerful and corrupt of Los Angeles. One a decorated cop - the other a senator, find themselves in a seedy motel room on the eastern edge of Sunset Boulevard on a dark and rainy night. Something has gone very wrong. Can Power exist without Water? The Fixers and Powers of the city need answers. Everybody is looking for the Twins. Nothing is concrete in LA - except the river.....(c) Official Facebook

A quintessential L.A. story that is worth seeing for what it has to say, if not necessarily for how it says it.

The mystical-mythical narration of this 'story of fathers, sons, and holy ghosts,' courtesy of a wheelchair-bound chronicler, serves as a constant reminder of the stagy source.

There are no featured audience reviews yet. Click the link below to see what others say about Water & Power!