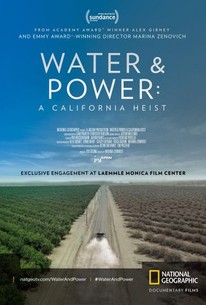 Water & Power: A California Heist reveals the story of how a handful of water barons gained control of the state's most precious resource, while drought and a groundwater crisis left local homeowners with dry wells. From a 1990s backroom rewrite of the State Water Project through a breaking investigation into illicit transfers of groundwater, the film peels back the layers on a complex world most of us know nothing about and would never question unless our taps ran dry. California supplies half of the nation's produce and is the world's fifth largest food supplier. With our breadbasket at stake, Americans and the world are waking up to a stark reality: Water is the next commodity, and it is rapidly growing more valuable. As a California resident warns us, "You're going to be next. Just watch, you're going to be next."

Guided by the work of a handful of burr-like journalists, this dense and disturbing documentary dives into the regulatory quagmire of California water rights with more courage than hope.

While the approach taken by filmmaker Marina Zenovich, who directed 2008's "Roman Polanski: Wanted and Desired," relies heavily on talking heads - Gov. Jerry Brown among them - she admittedly paints a compelling picture of timeless greed.

The history of California is written in water, and in the shady deals that allow a few to control it, director Marina Zenovich shows in her fact-packed documentary Water & Power: A California Heist.

There are no featured reviews for Water & Power: A California Heist at this time.