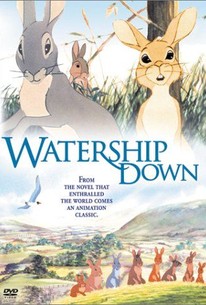 Unique in the annals of animated films, Watership Down is a serious, even grim tale that many will find relentless and depressing and others will find poetic and moving. It doesn't pull any punches. Death -- violent, disturbing death -- is ever present, portrayed in a manner that is astonishingly honest for a cartoon. As a result, it is that rare animated film that really aims for a mature audience, despite its superficial funny animal trappings. It has a brilliant opening, most likely created by UPA veteran John Hubley, which in a primitive and simplistic style relates a creation myth as told by rabbits. The style changes thereafter, with beautiful watercolor backgrounds and a more natural approach to character animation. Unfortunately, the animation suffers somewhat from this point, becoming a bit sloppy, although it continues to portray the characters' movements as realistically as possible. The character designs themselves are rather too similar, with the result that it is sometimes difficult to tell the various rabbits apart. The story is also sometimes told in too-broad strokes, leaving those unfamiliar with the novel confused as to exactly what has happened and, more importantly, why. However, these flaws are redeemed by some unforgettable sequences, including a chilling segment detailing the destruction of the rabbits' warren and a devastatingly sad end sequence in which the Black Rabbit of Death gently takes one of the heroes away with it. Voiced by a fine cast, with stellar work from John Hurt and Richard Briers, Watership Down is an imperfect film with some of the most powerful moments ever created for the genre. ~ Craig Butler, Rovi

Derek Griffiths
as Vervain
View All

News & Interviews for Watership Down

View All Watership Down News

Critic Reviews for Watership Down

It's a work deeply enamored with its source material, and determined to do right by it, even if it means frightening kids, baffling parents, and embracing whatever style works.

A rare movie that keeps kids on the edge of their chairs without inducing in their parents an overwhelming desire to escape theirs for a smoke in the lobby.

A brief spark of imagination survives in a prologue sequence, designed by the great John Hubley before he was fired from the film. The rest is blandness.

The 'camera' takes a conventionally objective viewpoint, perpetually rolling over rolling countryside, which effectively robs the plot of all its terror and tension.

A singular achievement in English-language animation: a thematically and emotionally rich cartoon about talking animals, untouched by sentiment and cutesiness.

I love the book and I think... that this is a worthy adaptation.

The movie is the antithesis of the modern standard, plodding and patient, unbothered by flashy bright images or relentless comical interludes.

Although this is an animated film featuring cute rabbits as the main characters, this is far from a children's movie, and considering the violence and horror to be found in this film, it is rather surprising that the MPAA passed it with a PG rating.

The animation style veers between poetic and prosaic.

A rather faithful adaptation of [Richard] Adams' book, as well as a milestone work of independent animation.

...lovely to look at and fun to listen to, but dull and lethargic in spots, too, and sometimes brutally savage.

Audience Reviews for Watership Down

Watership Down shows faithfulness and outmost respect for the novel. I admire the choice to go in the direction of adults for a film that features bunnies. It's amazing how a cartoon can really push the barriers for emotional impact. It's suprisingly gory (it was a pleasant one). I cry when I watch Watership Down. It's an underated animated jewel that one day will be appreciated for it's majesty. An absolute classic, among my favorite films.

This is possibly one of those innovative animated tales that is nowhere near recognized for the strength and creativity it has. Watership Down is a story that makes Bambi looked entirely phoned in and misguided (not saying it is). Strong in voice acting and stunning artwork, this film starts off just a little lacking in the animation department, but that changes less than ten minutes in, for you are taken away by the complexity, drama and overall tension of the story and environment. And not only this, the film is created in such a way that it is far more suitable for adults than children, even if it is centered around a collection of rabbits and their search for a new home. Most likely where Charles Grosvenor got the plotline for his much more "kids-friendly" film Once Upon A Forest, Watership Down is edgy, dramatic, truly beautiful and wonderfully engrossing, one of the best animated films I have ever seen.

Such a great movie, loved it as a kid and still stands up today. Brings a tear to my everytime I watch it.

Like Dark Crystal and Wizard of Oz, it's one of those classic kids films that's almost guaranteed to scar your children for life.