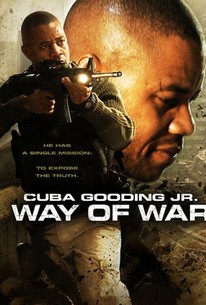 A highly trained assassin uncovers evidence of a vast U.S. conspiracy that reaches to the upper ranks of government in this action thriller starring Cuba Gooding, Jr. Paramilitary operative David Wolfe (Gooding, Jr.) is on a mission to kill one of the most notorious terrorists in the Middle East when he discovers that the top members of the administration are deeply corrupt. A target of his own country due to the volatile knowledge he now possesses, Wolfe attempts to stay out of the crosshairs long enough to expose the truth and ensure that justice is served.

John Terry
as the Secretary

Lance Reddick
as The Black Man

Critic Reviews for The Way of War

There are no critic reviews yet for The Way of War. Keep checking Rotten Tomatoes for updates!

Audience Reviews for The Way of War

There was absolutely no positive attribute that I can think of, except when the credits came up and I was able to confirm that the film really did just suck. Highly recommend to all my haters!!!

Started out very boring, and I was truely unware of what was happening, beyond all the "Racist Jokes". This film was pretty out of luck with alot of people cause it started off way too slowly, and wasn't that interesting or involving from then on out. Not really Reccomended.

The Way of War Quotes