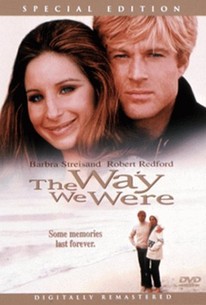 Critics Consensus: The Way We Were is not politically confrontational enough for its story of ideological opposites falling in love to feel authentic, but Barbra Streisand and Robert Redford's beaming star power gives this melodrama romantic lift.

Critics Consensus: The Way We Were is not politically confrontational enough for its story of ideological opposites falling in love to feel authentic, but Barbra Streisand and Robert Redford's beaming star power gives this melodrama romantic lift.

Critic Consensus: The Way We Were is not politically confrontational enough for its story of ideological opposites falling in love to feel authentic, but Barbra Streisand and Robert Redford's beaming star power gives this melodrama romantic lift.

The Way We Were Photos

In 1937 spit-fire Katie Morosky briefly meets the preppy Hubbell Gardiner. Almost eight years later, the two are reunited in New York, when leftist radio worker Katie spies military officer Hubbell in a nightclub. The two opposites fall in love and head to Hollywood so that Hubbell can write a screenplay for producer pal J.J. But the House Committee on Un-American Activities' Communist witch hunt in 1947 tears the pair apart, as a pregnant Katie refuses to keep silent about the jailing of the Hollywood Ten, while a faithless Hubbell decides to save his career. When the two meet again in the 1960s, TV writer Hubbell and nuclear protestor Katie feel that old pull again, but they have to decide if they have what it takes for the long run.

Critic Reviews for The Way We Were

The Way We Were is a fluke -- a torpedoed ship full of gaping holes that comes snugly into port.

For a screen romance with huge movie stars, that sentiment feels pretty real.

Streisand is capable in an implausible role as a liberated Jewess, and Redford is...well, Redford.

By, some peculiar alchemy, "The Way We Were" turns into the kind of compromised claptrap that Hubbell is supposed to be making within the film and that we're meant to think is a sellout. It is.

The movie has the look of a big Hollywood romantic film but because director Pollack looks corruption in the face and exposes it for what it feels like, The Way We Were emerges as one of the least sentimental love stories ever filmed.

The leads are so good (working with a strong script by Arthur Laurents) that the events surrounding their relationship rarely feel as significant.

Pollack's direction, sure and precise when shooting his stars alone in a room, collapses to the extent that he loses his narrative line.

The entire picture reeks of prophetic hindsight, whereby the cleverer characters so splendidly predict the future, thanks to the author's writing them years after the fact.

While I could not really believe much of what I saw, my eyes never left the screen.

Redford, as a character seemingly hewn from the pages of F Scott Fitzgerald (he's a writer to boot), is perfectly cast and Streisand is simply Streisand.

Audience Reviews for The Way We Were

This movie starts out with heated sociopolitical debate and a great feminist role model, but then brassy, independent Katie devolves into Overly Attached Girlfriend - fawning over Hubbell, the poor little rich boy with a streak of writing talent, who buys her a beer and patronizingly ties her freakin' shoe? (I hate all shoe-tying imagery in art! I hate it when looks-so-much-like-his-dead-mother Ginny does it to Harry Potter. I hate it when Ted does it to baby-talking Boats-Boats-Boats Becky on HIMYM. I surprisingly don't mind glass slipper symbology because it's quick, okay? You just slip it on. "It's the condom of our generation." Tying a shoe is a ham-handed, Oedipal commitment of a romantic gesture.) Anyway, Katie essentially rapes him and ropes him into falling in love with her, but she's made to apologize so much for her tempestuousness and "wrong style" while Robert Redford's dead eyes glaze over in a masquerade of privileged, white, liberal ennui. The flashback structure of the film's beginning is also wasted. I thought YEARS had gone by before they meet again and that the whole movie would be about their college relationship and "the way they were"... The movie gets so episodic after that inciting incident, documenting every bit of grueling conflict contributing to their doomed partnership. A donnee or redemption moment nearly appears when Katie shouts, "You'll never find anyone as good for you as I am, to believe in you as much as I do or to love you as much!" but it's too late. They're still wrong for each other, but we're never given a convincing enough reason in the script or the performances for why they got together in the first place and why they stayed together for so long. And he never meets their daughter? Weird. Highlight is Barbra Streisand's soaring mezzo-soprano in Marvin Hamlisch's titular song.

Set against the background of political turmoil, a radical and a milquetoast writer fall in love. A saccharine love story, when this film succeeds it's because Robert Redford was just absolutely dreamy in his prime. He was also a great actor, working with a subtle strength and playing off his natural magnetism. However, most of the time, there is little that any actor can do to save this meandering script. There is a certain truth to relationships that flounder because there is too much work involved, but this theme is more developed in real life than in cinema, and this film doesn't do much original. I've never been a fan of Barbra Streisand as a cultural icon or as an actress, and while I can't say that there was anything horrible about her acting, there wasn't anything extraordinary either. Overall, this film is another reason to love Redford, but the story is weak.

Saddest romantic movie you'll ever see. Redford and Streisand have beautiful performances as they star in this romantic classic from the 70s set in the late 30s and 40s about two completly opposite people struggling in a relationship. If you are are a true romantic like I am you'll love this Redford/Streisand classic. Love this movie :) You will too :) Just great :)

The Way We Were Quotes