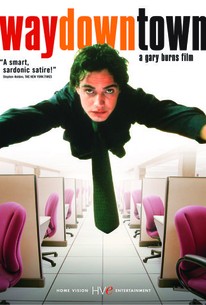 Four friends bet a month's salary to see who can stay indoors the longest... It's lunch hour on day 24 of the wager and everyone's pretty much reached their breaking point. Marijuana-medicated Tom struggles through an illicit affair, flights of self-doubt and periodic superhero sightings, all the while trying to ignore his cubicle mate, Brad, who spends most of the time playing a computer game when not plotting suicide. Go-getter Sandra, convinced toxic air is seeping through the building's vents, sniffs magazine perfume samples as she carries out her latest assignment--trailing her elderly kleptomaniac boss. Randy passes the time by assigning animal names to mall patrons while Curt, the perennially engaged office Lothario, makes his move on a vulnerable co-worker. By the lunch hour's end, the bet has prematurely unfolded, leaving all participants to re-examine what could possibly be worth more than their happiness and freedom.

Dan Willmott
as Julian
View All

The film's snags and stumblings are more than compensated for by its wryly subversive tone.

Dilbert without the right-on satiric humor.

A well-put-together piece of urban satire.

With wit and empathy to spare, waydowntown acknowledges the silent screams of workaday inertia but stops short of indulging its characters' striving solipsism.

The perfect film for those who like sick comedies that can be snide.

...either you're willing to go with this claustrophobic concept or you're not.

Waydowntown just like most large cities, isn't somewhere you'll want to spend the rest of your life, but it sure is a fun place to visit for a while.

A smart and creative comedy that skewers cheaply dehumanizing architecture and self-absorbed yuppie mentalities in a series of skillfully assembled scenes.

A nice visit to my home city of Calgary; too bad most of it is spent trapped indoors. I like the shots where he is swimming through the walkways like a fish.

Not recommanded to claustophobic ppl!