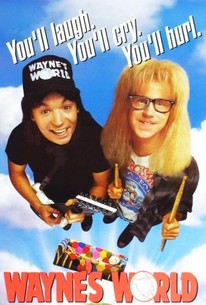 Critics Consensus: An oddball comedy that revels in its silliness and memorable catch phrases, Wayne's World is also fondly regarded because of its endearing characters.

Critics Consensus: An oddball comedy that revels in its silliness and memorable catch phrases, Wayne's World is also fondly regarded because of its endearing characters.

Critic Consensus: An oddball comedy that revels in its silliness and memorable catch phrases, Wayne's World is also fondly regarded because of its endearing characters.

Originally a skit on "Saturday Night Live" during the late '80s and early '90s, "Wayne's World" is about two teenage dudes who host a public access TV show, which is mainly about rock, babes and people who live in the area. One day Wayne and Garth go to a rock concert, and Wayne falls in love with a bass guitarist named Cassandra Wong. Wayne spends the rest of the movie trying to get Casandra to fall in love with him. He also struggles with a network executive who wants to buy the rights to his show.

The film still has its priceless moments, however, the best of which comes from Wayne and his pals driving around town while singing along to Queen's Bohemian Rhapsody.

Lots of tasteless jokes, and no need to pay attention -- if you miss a punch line, don't worry. It will be back again in 10 minutes or so.

Wayne's World is a sociological dissertation on the post-adolescent, pre-existential, psychodynamic polemics of popular culture. Not. Wayne's World is a ton of fun for people who are younger than 30 or who think they are.

Amazingly, the patched-together and padded screen version manages to amuse, if only through the sheer brazenness of its stupidity.

Party on, Wayne and Garth, and welcome to the movies.

Wayne's World is at its funniest when it steers away from the plot and into sheer irreverence.

For those who remember and loved Wayne's World doing its heyday, this is a nostalgic stroll down memory lane when they were also in their heyday.

To give credit, there are isolated moments of hilarity here -- individual lines that suggest an insouciant wit or a sight gag, usually involving Carvey's befuddled Garth that triggers explosive laughter. But those moments are few and far between.

For die-hard fans only.

Have no fear, dudes, the off-the-wall combination of metallic slapstick and Mad magazinish satire has been sustained to the max.

Sure, it's dumb and juvenile. But just try to keep a straight face as our suburban cadets lip-sync to Queen's Bohemian Rhapsody.

The movie is good-natured and fun, riding successfully on the talents of its three principals, Myers, Carvey and Lowe. It is also packed with witty throw-away lines and heavy-metal signifiers that raise a smile.

Moronically hilarious and clever for this oddball comedy. Wayne's World is highlighted by the constant humor from Myers & Carvey, making it one of the most successful SNL-sketch-based-films to date. 4/5

It may be one of the dumbest comedies to ever come out of Hollywood, but these characters are undeniable some of the funniest people every put to screen, especially from a film that was solely based on a sketch show. The jokes hit almost every time throughout this film, due to it's genus writing, ripping on the Hollywood stereotypes and product placement laws. Clearly they had a blast making this film, because the audience has just as much fun as them. I will say that it is a very subjective picture, due to it's appeal. Most people will probably get a kick out of this film, but some will probably bow their heads in shame as to how dumb it is, but at least it is self-aware. I thought "Wayne's World" was great!

Mike Myers' takes a pretty good jab at the American, middle class,basement-living, stoner/slacker rock and roll dreamer culture. Although it helps if you've been there, its not entirely necessary to get the busload of culture references thrown around with merry glee and with nary a drug reference made at all.