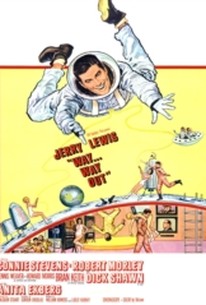 Comical chaos erupts when milquetoast astronaut Peter Mattemore (Jerry Lewis) and his bride-of-convenience and fellow astronaut (the government forced them to marry to avoid scandal) Eileen Forbes (Connie Stevens) are sent to a lunar space station, which they will share with a Russian couple, to monitor the weather and replace their two predecessors, both of whom have gone bonkers.

Critic Reviews for Way...Way Out

There are no critic reviews yet for Way...Way Out. Keep checking Rotten Tomatoes for updates!

There are no featured reviews for Way...Way Out at this time.