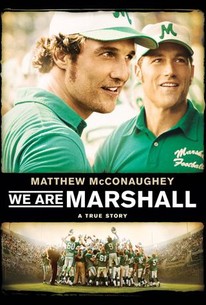 Critics Consensus: Matthew McConaughey almost runs We Are Marshall to the end zone, but can't stop it from taking the easy, feel-good route in memorializing this historic event in American sports.

Critics Consensus: Matthew McConaughey almost runs We Are Marshall to the end zone, but can't stop it from taking the easy, feel-good route in memorializing this historic event in American sports.

Critic Consensus: Matthew McConaughey almost runs We Are Marshall to the end zone, but can't stop it from taking the easy, feel-good route in memorializing this historic event in American sports.

We Are Marshall Photos

A true story of tragedy, hope, and resilience comes to the screen in this sports drama. Huntington, WV, is home to Marshall University, a school where college football is a way of life. Huntington is also a town that learned to deal with tragedy in the fall of 1970 when Marshall's "Thundering Herd" boarded an airliner to return home after a football game in North Carolina. The jet crashed into a hill due to bad weather, and 75 members of Marshall's football squad and athletic staff died that night. The accident dealt a crippling blow to the city of Huntington, as well as Marshall's faculty and student body, and university president Donald Dedmon (David Strathairn) considered abandoning the school's football program. But instead Coach Jack Lengyel (Matthew McConaughey) was recruited from Ohio's College of Wooster to rebuild Marshall's football program. Lengyel was not naïve about the task ahead of him, and working beside Red Dawson (Matthew Fox), an assistant coach who narrowly missed the doomed flight and was one of the program's only survivors, he came to understand his job was not just to put a team on the field, but help a college and a community heal their wounds from the tragic accident. Together Lengyel and Dawson turned a handful of rookies and second-string players into a competitive team who in 1971 showed the world what they could do in a legendary game against Marshall's rivals, Xavier University. Produced with the cooperation of Marshall University and filmed in part on their campus, We Are Marshall also stars Ian McShane, Anthony Mackie, and January Jones. ~ Mark Deming, Rovi

Wilbur Fitzgerald
as Fireman No. 1

Billy Woods
as Airport Booster No. 1

Scott Hilley
as Man In The Rain

Bert Beatson
as Player No. 3

Andrew DiPalma
as Diner Student No. 1

Maurice Bryant
as Xavier No. 19

Phillip Ivey
as Man In The Car At The Theater

Bobby Jon Drinkard
as Player No. 4

Ryan Sloth
as Marshall No. 51

Jeff Portell
as Fireman No. 2

William Gorman
as Freshman No. 2

Jake Cooper
as Freshman No. 1

Jeff Adelman
as Diner Student No. 2

News & Interviews for We Are Marshall

View All We Are Marshall News

Critic Reviews for We Are Marshall

What allows We Are Marshall to stand above many of the other 2006 sports movies is both the undeniable power of the story itself and the strong ensemble McG gathered to tell it.

Unlike a lot of sports movies, it doesn't end with a championship or a great upset over a powerhouse. The real victory on the Marshall campus was in fielding a team that honored and respected the legacy of the 1970 team.

We Are Marshall isn't about grief or loss, but how these things can be overcome. It's uplifting, but shallow.

This is a movie that sits there, doing nothing, leaving an audience waiting and wondering why they are supposed to care or get emotionally involved, which is really too bad because there is a great story to be told here.

This was undeniably a horrific event for the victims' families friends, colleagues as well as for the entire community. But the movie seems to almost exploit this tragedy so it can make audiences weep, and ultimately, cheer.

What's missing is any kind of insight into the lives of the dead players or the members of the Young Thundering Herd who rise up to replace them.

One of 2006's greatest cinematic tragedies.

"Marshall" is such an emotionally charged subject matter that the film works -- even if it doesn't always click.

...would've benefited from the presence of virtually any other actor in the central role...

We Are Marshall is not a bad movie; it is a potentially nice, familiar movie unfortunately marred by the unspeakably awful performance of Matthew McConaughey.

A sentimental, simplistically inspiring movie that leans heavily on Matthew McConaughey's substantial energy and charisma for its success.

Audience Reviews for We Are Marshall

We Are Marshall is an over bearing cliché riddled feel good film that unfortunately doesn't deliver. This is the type of film we've seen many times before. This film doesn't work and is quite tiresome. I really didn't enjoy the film, and was very disappointed in the way it turned out. I was very much looking forward in seeing this film, and when I did, the only thing I noticed was the standard sports clichés set to a real life tragedy. The film did start off well, but afterwards it played on it clichés to deliver its entertainment. The cast seem to overdo their performances on-screen. Overall there is nothing really good to take away from this film. The film is too predictable, and it ends up being another feel good sports drama. There's nothing within the film to really make it a stand out film, and it doesn't break new ground or do anything new in the genre. We Are Marshall is the same old tired out formula that seems to plague sports dramas. With this film, there's really no performance that really stands out. I felt the cast was pretty bland. I felt that considering that this is a true story, there could have been a lot more effort put into it. But in the end, We Are Marshall is a cliché riddled film that simply is no different than any other films in this genre. There are better films out there, than this one. We Are Marshall simply don't deliver anything new or refreshing, something that is much needed in this genre. Expect a film with lots of clichés with this one, and you may not be disappointed. I for one, was, and didn't think too much of this film.

Movie based on a true story about a town called Huntingdon who lost their university football team and staff in a tragic plane accident. The president if the school wants to abandon the football programme but some students convince him not to. He employs football coach and assistant coach - two Matthews. Looks at hope from tragedy. Good cast.

I personall though it was sweet. Mathew Mcaughnahey is a good actor, the plot was great for 20 minutes but then became another football movie. It was a fun, classy movie and is I really liked it.

Moving and painful. While it is obviously loosely following the real events, even tha tis enought ot make you stand up and salute the town. Indeed We Are Marshall.

We Are Marshall Quotes