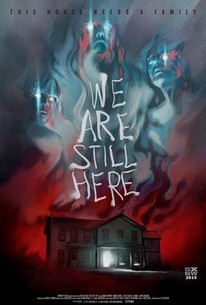 Critics Consensus: Smart, powerfully acted, and devilishly clever, We Are Still Here offers some novel twists on familiar territory -- and heralds the arrival of a major talent in writer-director Ted Geoghegan.

Critics Consensus: Smart, powerfully acted, and devilishly clever, We Are Still Here offers some novel twists on familiar territory -- and heralds the arrival of a major talent in writer-director Ted Geoghegan.

Critic Consensus: Smart, powerfully acted, and devilishly clever, We Are Still Here offers some novel twists on familiar territory -- and heralds the arrival of a major talent in writer-director Ted Geoghegan.

We Are Still Here Photos

In the cold, wintery fields of New England, a lonely old house wakes up every thirty years - and demands a sacrifice.

Lisa Marie
as May Lewis

News & Interviews for We Are Still Here

50 Fresh Scary Movies and TV Shows to Watch on Netflix
Okja, Glow Season 1, Paterson, and More on Netflix and Amazon Prime This Week
On Netflix This Week: Goosebumps, We Are Still Here, and More

View All We Are Still Here News

Critic Reviews for We Are Still Here

Showcasing juicy performances by its actors who tear into their stock roles with admirable conviction, the film looks terrific.

Though ultimately a bloody, gory affair, full of sinister citizenry, country conspiracies & revengeful revenants, what makes WASHere stay burnt into the brain is its special brand of irrationality, not so much resolved as perpetuated in the end.

More than a mere homage, "We Are Still Here" is the kind of movie you wish you could take back in time with you and project in your favorite 42nd Street grindhouse.

Once "We Are Still Here" unsticks itself from hommage mode, it finds something cathartically funny inside the fearsome.

"We Are Still Here" will make you scream and make you laugh, and possibly leave you speechlessly gesticulating at a charred zombielike ghost in the background. But the peak moments are too few ...

Think of it as an "unmake": an effort to make the new old again.

We Are Still Here delivers on the scares while showing a story of loss. It's effective and works on many levels, not the least of which being how it homages scary movies of the 1970s.

There is a skill working through the frames of director Ted Geoghegan's debut opus, providing us with enough allure and tension to more than make up for the maddening uncertainty.

Geoghegan shows a healthy love of gore as he smears the quiet landscape with red.

A wonderfully weird, gory and full of heart and poignancy, We Are Still Here is an assured and well-crafted debut from Geoghegan that's clearly a heartfelt love letter embracing what genre fans enjoy most about horror movies.

Those who can spot a Fulci reference will likely embrace this creepy, bloody haunted house movie more than mainstream viewers. But if you like your horror, it's a treat.

A love letter to Fulci and the Italian masters, this retro horror tale recalls his House by the Cemetery by way of Sam Raimi's Evil Dead.

Audience Reviews for We Are Still Here

It is easy to see what Geoghegan is trying to do with this old-school throwback to the horror movies of the 1970s, but while it is creepy, well paced and really scary, it is also very badly written to the point that nothing makes sense and I can't make heads and tails of it.

I've been looking forward to this movie for some time now. It's actually not even that long ago now, I'd say around a month, and I can say that I definitely wasn't disappointed by this movie. As far as haunted house horror movies go, and describing this movie as just a haunted house flick is vastly underselling it, but I think this might be the best I've seen since The Conjuring. Though, honestly, I think The Conjuring does a better job at getting conventional scares out of the concept, whereas this one tries to do something different with it. Visually, the film reminds me very much of The House of the Devil, it almost feels like both films could actually exist in the same universe. Though, to be fair, House of the Devil does, for most of its running length, deal with something that's more 'realistic', per se, than this one, where it's clearly all supernatural. But I thought the movie was really well-paced and it built well. The story, or what's going on in the house, is established fairly quickly and it's just a point of giving you little bits and pieces of information until you get to the last act, where it goes all out. That's not to say that there is a lack of horror until that point, because there isn't. Actually, this might be one of the more balanced horror movies I've seen this year in terms of balancing horror and exposition. It's not a slow-paced movie at all. I wouldn't say it's fast paced either, it's just perfect as far as pacing goes honestly. There's a lot of tension here that keeps building and building up until its insane climax. I know I'm sort of raving about the movie, but it's definitely not without its issues. They never make it exactly clear what's going on here in the house, whether it's the house that demands the sacrifice or it's the Dagmars. And it's not like they were trying to be subtle about it, this was a big reveal at the end of the film, where, the patriarch of the Dagmar family, states that his family wasn't run out of town, but were in fact sacrificed to the house. And that brings up more questions than it does answers. Why does the house require a sacrifice? And how did the house go about sacrificing the families that have the unfortunate 'honor' of living in this house. It sort of makes sense when the Dagmar family does it, within its context of course, but it brings up questions that need explaining when you say that it's just the house that demands it and not the vengeful family. And, another thing, if the Dagmar could just come out and murder people, as they did with Bobby's friend and his girlfriend, then why did they not immediately murder Anne and Paul upon moving into the house? Were they not a 'family'? And there's also the fact that Anne and Paul were allowed to live. Though I can tolerate the latter more, because it opens things up to debate. The other ones bother me because it changes on something the film already stated as fact without giving you so much of an explanation as to why that was. So it's just strange to me that movie so well-crafted, so taut and intelligent could have those types of flaws. The acting is also really quite strong, it helps that they have a really good script to work with, outside of the aforementioned issues. This might not be my favorite horror movie of the year, that honor would go to It Follows, but it's still a really damn good horror film. It's smart and it builds tension really well and the climax is pretty damn crazy. This may have its flaws, but I'd still recommend this wholeheartedly. Horror nerds will love this.

Some of it's plot is half baked, there are some really weak performances, but the utterly shocking and wonderfully gory finale makes the whole movie worth a viewing.

Poorly paced and scripted, this sophomore effort boasts a few recognizable faces but lacks any real atmosphere or tension. The photography is cramped and banal, the performances seem like third rate impersonations of other, better ones (there's a faux-Nicholson and a Burstyn knock-off,) and the ghosts are dull, scorched, black-eyed zombie specters that jump out in the first ten minutes and then never stop leaping out to grab people's faces with their smoking fingers. The location is a dull one and the house has no particular geography or presence. Haunted houses don't have to be shadowy mansions: think the little suburban dwelling in 'The Grudge'. It's not funny enough to be a camp pastiche and its high rating on RT mystifies me. I can only imagine the reviews were written by the director's friends. A very inauspicious debut. Come back Ty West: all is forgiven.

We Are Still Here Quotes