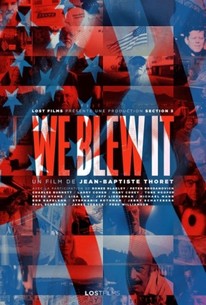 We Blew It Photos

How did America move from Easy Rider to Donald Trump? What became of the dreams and utopias of the 1960s and 1970s? What do those who have lived through this golden age think today? Did they really screw everything up in the air? Filmed in Cinemascope, from New Jersey to California, this melancholic and elegiac road-movie portrays a disconcerted, complex America, heated to blank by a year of electoral campaign. Inconsolable of a golden age become her last romantic frontier, she is nevertheless preparing to pull the trigger Trump.

Critic Reviews for We Blew It

We Blew It is far from being a routine run-through of a decade whose legacy continues to divide.

Audience Reviews for We Blew It

There are no featured audience reviews yet. Click the link below to see what others say about We Blew It!

We Blew It Quotes