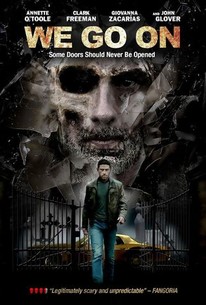 We Go On Videos

We Go On Photos

WE GO ON tells the story of one man's quest to find out if there is more out there after we die. Paralyzed by his fear of dying, Miles Grissom offers a cash reward to the first person who can show him a ghost, an angel, a demon anything that can prove that we go on after our deaths. He narrows the responses down to three viable candidates a scientist, a medium, and a worldly entrepreneur. Along with his fiercely protective mother, he embarks on an adventure that will spiral into an unthinkable nightmare.

Critic Reviews for We Go On

This uneven but watchable effort stars Clark Freeman as a man of many phobias whose terror of death leads him to find out more about the afterlife than he wanted.

I think this [film] has done an amazing job of incorporating great actors, an original storyline by far, and also the set dressing and locations.

... a touching film that deals with themes of death, life, the fear of dying, what is after death, regrets, etc. It does so in a way that will appeal to horror fans and non-horror fans.

The biggest strength of We Go On is the clever, ruminative script by the co-directors which slyly mixes humor, dread, and thematic depth to make a film that is even more than the sum of its parts.

Because We Go On is aware of its limitations, it doesn't try for the 'wow' factor. It could have taken some risks and deliver some jolts, but overall, it's a tidy endeavor.

We Go On takes the audience on a journey through the existential crisis of fearing death, as well as examining trauma, death itself, and how we overcome them both.

We Go On is a ghost story for the intellectual horror fan who wants it all; an interesting plot, great acting, multiple scares, and twists you never saw coming.

It dismantles the horror genre, breaking it down to its core elements of fear and death, and then re-editing them into something satisfyingly profound.

The narrative arc of We Go On curves along a satisfying path with its share of surprises but its biggest achievement is the everyday naturalistic tone in which the film's philosophical concerns find purchase.

To fully appreciate We Go On, you have to kind of surrender to it. To fall into it and let the talented directors simply guide you through their carefully controlled landscape.

It never quite pulls together, never quite chills as it could do, but overall is a decent film that has ambition and is an agreeable enough way to spend an hour and a half.

Audience Reviews for We Go On

We Go On Quotes