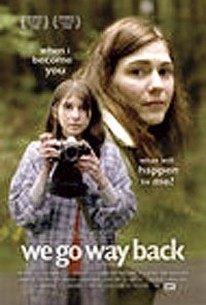 We Go Way Back Photos

A hard-working young actress with a small theater company, Kate lands her first leading role on her 23rd birthday. When she reads a cheerfully inquisitive birthday letter from her 13-year-old self, it seems she might actually be fulfilling childhood aspirations. But the letter triggers mounting confusion for Kate, and her former self - in the form of a voice and the occasional fleeting vision - won't seem to go away. As Kate bends to the whims of those around her with dwindling resistance, the protests of her adolescent self grow more hauntingly intrusive until, in a surrealistic turn, 13-year-old Katie appears in the flesh, primed for a confrontation. Beautifully shot and poetically edited, this resonant film explores the comedy and pain of finding the courage to face up to yourself. --(c) Official Site

Amber Hubert
as Kate at 23

Maggie Brown
as Kate at 13

Robert Hamilton Wright
as The Director

Sullivan Brown
as Jeremy
View All

News & Interviews for We Go Way Back

View All We Go Way Back News

Critic Reviews for We Go Way Back

We Go Way Back is another tale of a twentysomething struggling to get a grip on their life.

More successful at conjuring atmosphere than at plot, "We Go Way Back" is nicely acted but frustratingly slight.

For all of the film's preciousness, the pungent notion of having your young-teen self gazing in horrified disappointment at the adult you've failed to become is as fresh a thematic undertow as it is disquieting.

Depression is the subject of the locally produced We Go Way Back, yet the movie works best as a backstage comedy in the tradition of Waiting for Guffman.

[A] diverting but ultimately weightless effort.

For the first half, you can kid yourself that these witty sidetrips are what the film is about. But then Shelton gets "serious," and it dissolves into arty murk.

First time director Lynn Shelton breaks too many narrative laws for it to work as a feature.

There are no featured reviews for We Go Way Back at this time.

We Go Way Back Quotes