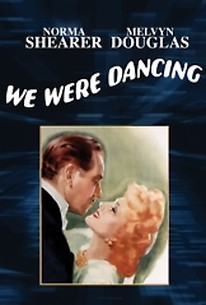 We Were Dancing Photos

Strange but true: Norma Shearer turned down the title role in Mrs. Miniver to star instead in the insignificant trifle We Were Dancing. Loosely based on two Noel Coward playlets originally presented as part of the omnibus production Tonight at 8:30, the story concerns the romance between socialite Vicki Wilomirsky (Norma Shearer) and Nicki Prax (Melvyn Douglas), an impoverished baron who supports himself as a "professional guest." Nicki steals Vicki away from her stuffy attorney fiance Hubert Tyler (Lee Bowman), but their subsequent marriage comes to an end when Vicki spots Nicki in the arms of his ex-lover Linda Wayne (Gail Patrick). Returning to Tyler, Vicki is on the verge of a second marriage, when Nicki once again waltzes into her life?.and on and on it goes, where it will stop, nobody knows.

Paul Porcasi
as Manager of Duquesne

Gino Corrado
as Headwaiter in Inn

Ava Gardner
as Girl
View All

Critic Reviews for We Were Dancing

There are no critic reviews yet for We Were Dancing. Keep checking Rotten Tomatoes for updates!

Audience Reviews for We Were Dancing

We Were Dancing Quotes