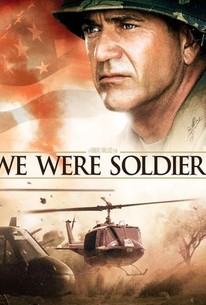 Critics Consensus: The war cliches are laid on a bit thick, but the movie succeeds at putting a human face on soldiers of both sides in the Vietnam War.

Critics Consensus: The war cliches are laid on a bit thick, but the movie succeeds at putting a human face on soldiers of both sides in the Vietnam War.

Critic Consensus: The war cliches are laid on a bit thick, but the movie succeeds at putting a human face on soldiers of both sides in the Vietnam War.

We Were Soldiers Photos

A fact-based tale of men under fire, their common acts of uncommon valor, and their loyalty to and love for one another during one of the most savage military battles in U.S. history. On November 14, 1965, in the Ia Drang Valley of Vietnam, in a small clearing called Landing Zone X-Ray, Lieutenant Colonel Hal Moore and 400 troopers from the U.S. 7th Air Cavalry are surrounded by 2000 enemy soldiers in what would become the first, and perhaps the worst, major battle of the Vietnam War.

Sean Bunch
as Trooper No. 4

Shepard Koster
as Reporter No. 1

Kate Lombardi
as Reporter No. 2

Patrick St. Esprit
as General No. 2

News & Interviews for We Were Soldiers

View All We Were Soldiers News

Critic Reviews for We Were Soldiers

One of the most violent movies ever released.

We Were Soldiers is, ultimately, a powerful and moving experience--once it overcomes its clunky, badly written and cliched first act.

Gibson wears a rictus of distaste which seems more suggestive of dodgy on-set catering than the horrors of combat.

Probably the best thing you can say about We Were Soldiers is that it does justice to an awful conflict.

The Vietnam setting looks authentic enough, but the action is as inert and unpersuasive as Gibson's attempt to fashion Bill Mauldin poetry out of his $20-million-plus smirk.

Makes you cry for the hundreds of thousands of men and women who died so pointlessly with Geoghegan. And their orphans.

As Lt. Col. Hal Moore opined to Sgt. Major Plumley during the throes of battle, 'I wonder what Custer was thinking when he realized he'd moved his men into slaughter.' Plumley's natural reply, 'Sir, Custer was a p--.'

The war genre, vigorously energized with Saving Private Ryan and Black Hawk Down, takes several steps backward with this old-fashioned moralistic saga, a tribute not only to the soldiers in combat in Vietnam but also to the homefront.

I was impressed by Wallace's emphasis of Moore's faith, but the violence struck me as excessive, taking valuable time that could have been used to develop characters.

... A fitting tribute to all the men and women who have fought and died for their country -- and for each other.

Ultimately, it staggers out bloodied, partially bowed, but at least not totally beaten.

Audience Reviews for We Were Soldiers

"We Were Soldiers is a really well made war movie of the Vietnam War. It's really intense. The action never lets up. There is constant chaos and bodies dropping while more are being let off of the helicopter's. The acting is really good in this. I was surprised with how much talent was in one film. Usually you get a movie with some big leads and then some other small known actors. But there was plenty of well known actors which made this film all that much better because of the great performances that were given. I liked that the film showed both sides of the Vietnam War. I also liked how it showed how hard it is for the women waiting at home. It really was one of the better war films I have ever watched. A must see."

Its just so cliche. The action, music, and acting aren't motivating at all. The montage sequences drone on. Its just not that great.

I didn't like this war movie very much. I'm a huge fan of war movies and there has been some truly amazing , brillant war movies but i don't think this one is up to scratch.

We Were Soldiers is quite possibly the best Vietnam war film since Platoon. Based on Colonel Harold Moore's, We Were Soldiers Once... And Young. We Were Soldiers tells a compelling story about the first major engagement during the Vietnam war. Braveheart screenwriter, Randall Wallace directs this film with great accuracy. The film is not flawless, but for the most part, it does a great job at being authentic. The film does a great job at establishing the characters, unlike previous war films where you are shown little character development, We Were Soldiers demonstrates perfect character development and you sympathize when one of the characters are killed in combat. I found We Were Soldier to be very different than any other Vietnam war film because it shows the human side of these soldiers, we are shown the family side of the soldiers, and unlike every other Vietnam war film, we are shown that these soldiers have sympathy and aren't blood thirsty animals who are "baby killers". We Were Soldier an achievement in war films as it shows the carnage of war, and shows us the human side of it as well. Randall Wallace has crafted a phenomenal war film, and the cast he directs give stunning, poignant performances. We Were Soldiers is the best Vietnam war film to come along in a long time, and like I've said before, it's a very different one as well. Of course one of the best parts of this film is that it shows that the soldiers fighting this war weren't monsters, and for me that is a positive thing. The battle scenes are incredible, and very intense and suspenseful. Not flawless, but very close, We Were Soldiers is yet another memorable addition to the war genre. A fine film, and may I add also a misunderstood one at that.

We Were Soldiers Quotes