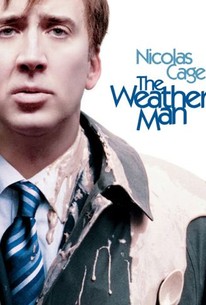 Critics Consensus: With fine performances and a dark, dry sense of humor, The Weather Man is mostly cloudy with occasional rays of sunshine.

Critics Consensus: With fine performances and a dark, dry sense of humor, The Weather Man is mostly cloudy with occasional rays of sunshine.

Critic Consensus: With fine performances and a dark, dry sense of humor, The Weather Man is mostly cloudy with occasional rays of sunshine.

A man struggles to get a grip on a life that's spinning out of control in this emotional comedy drama. Dave Spritz (Nicolas Cage) is a television weatherman on a high-profile Chicago news program. Professionally, Dave is doing just fine -- he makes great money for a job that demands little effort, and he has a shot at an assignment with a network morning news and chat show. But Dave's personal life leaves a lot to be desired -- his father, respected author Robert Spritzel (Michael Caine), is in failing health, he's divorced from his wife, Noreen (Hope Davis), and his relationship with his children is tenuous at best, especially his overweight daughter, Shelly (Gemmenne de la Pena). If Dave is to land his new job, he'll have to move to New York City, and with his time in Chicago running short, he dedicates himself to trying to salvage his ties with his family before it's too late, though he discovers this is even harder than he imagines.

Bryant Gumbel
as Himself

Cristina Ferrare
as Herself

Wolfgang Puck
as Himself

News & Interviews for The Weather Man

View All The Weather Man News

Critic Reviews for The Weather Man

It's a deeply honest and comic performance and seems filled with all the genuine humiliations that one imagines Cage himself has suffered in the past 10 years.

In the face of a character no one cares about, can audiences be faulted for asking: Why should we?

The most supremely odd American film of the year.

[Verbinski] and Steven Conrad hold their ground, sticking to their conviction that Dave's story should play as a belated-coming-of-age movie.

It's a strange film.

Yet another retread of Cage's weak formula of a gloomy man examining his life.

The Weather Man is more of a parable than a story; it just goes on and on and on, and the only point is to endure. It's not very uplifting, but sometimes it's funny, sometimes it's sad; sometimes hopeful, and sometimes melancholy. But that's life.

Intended as director Gore Verbinski's palate cleanser before back-to-back "Pirates of the Caribbean" sequels, this is an apprehensive cringe comedy of male malaise. It's also Verbinski's best to date, a small-scale challenge he should attempt more often.

If you've never heard of a "living funeral," this film is an icy introduction.

A look at the commonest fear nipping at the heart of Middle America. Not the war in Iraq, nor terrorism, but the breakdown of the family unit and how - and if - people can cope with it.

Narrated by Nic Cage in a zombie-like monotone, this flick is not only gross and morose, but relentlessly depressing.

Audience Reviews for The Weather Man

I can't quite diagnose what makes this movie tick... It's got problems, but it kinda works, much like Hans Zimmer's annoying yet irresistible tick-tocking score and Nicolas Cage's obnoxious, yet irresistible doofy-faced appeal, which I guess is why he still gets work. Steve Conrad's non-linear script is expertly paced with emotionally-based plot points. He captures daily tragedies and triumphs with an insightful, darkly comedic eye. Michael Caine is the best I've ever seen him - staid and grave with much pomp and circumstance.

This is the type of movie that Cage should be doing more often. Serious, well written character based dark dramedies. Don't get me wrong, the "fluff" he does is entertaining, but it gets old. Movies like this is where he really shines. It also helps that this is a smaller movie from Verbinski, and, at the time it was released, was a nice break between Pirates movies. This is a very underrated film, and although I don't agree with that, I can see why. I really think more people should give this a chance. It's a good movie. Somewhat similar to American Beauty, and it has a nice message, even if not one of the characters is really sympathetic...kind of like life sometimes.

Noreen: You know what, Dave? You want to know why my BJs lacked enthusiasm? I hated you. I hated your hair. I hated your ugly legs, your forearms. I hated kissing your lips, Dave. Okay? And that's why I lacked enthusiasm when your cock was in my mouth.  "... bring an umbrella"  The Weather Man isn't the type of movie where there's any excitement. It isn't a comedy with a ton of laughs. When there's humor, it tends to be pretty dry. This is a dark, character study, dramedy. I'm not going to say it is a great movie, because I don't believe that to be true. I do, however, think it is a worthwhile film. Gore Verbinski can always bring style to his films, and he does again with The Weather Man. Maybe its style isn't like that of Pirates of the Caribbean or The Ring, but it's still there. A weather man out of Chicago named Dave Spritz(changed from Spritzle because Spritz sounds refreshing) is getting looked at by Hello America in New York. The job would mean that he would make around a million dollars a year. It may sound like his life is great. Unfortunately it isn't. His father is dying, he's divorced and his ex-wife wants little to do with him, and his kids are dealing with all the problems kids have to deal with the added problem of their parents being divorced. So, maybe things aren't all that great for Dave after all. The Weather Man is the type of movie I love seeing Nicolas Cage in. He's made for movies like this, not Ghostrider or Season of the Witch. No, he's made for movies like The Weather Man, Leaving Las Vegas, and Matchstick Men. Okay, so I'm a Cage fan. I always have to argue with people who say he's a horrible actor. Just because the only movies you've seen him star in are the garbage mainstream films that get forced down your throat doesn't mean he's a bad actor. It means he's an increasingly lazy one. He's taking a lot of money to star in bad movies, and when actors star in badly written and plotted films; they're acting reflects that. Go watch Leaving Las Vegas and then tell me Nicolas Cage is a bad actor. That's what I tell everyone. I will say, I am beginning to lose respect for Cage because he hasn't challenged himself for awhile and he keeps making mindless movies, but never will I say that he is a bad actor. Never. My favorite parts of The Weather Man are when Cage and Caine were onscreen together. Caine is a favorite of mine and I thought the two of them were phenomenal together.  A lot of people have criticized the movie for not being able to care about the lead character. I can't argue with that statement, as the characters for whom we care about, has to do a lot with the person watching it. All I will say is that I was able to sympathize with him and I did care about him. Overall I think this is an underrated film. It's not a movie that will change the way you look at life or movies for that matter, but it is one that deserved a little better reception then it ended up getting.

A true hidden gem that seemed to fly straight to DVD. One that defies classification due to it's honest look at life. Call it a drama, a comedy, or even a dramedy if you feel so inclined. But life is often funny, sad, sweet, and bizarre, all at once. Nobody's words are perfect, not every situation carries significant meaning, and things often happen without any rhyme or reason. Director Gore Verbinski seems to understands this and translates this sentiment to the screen surprisingly well. It is a character study of a man just trying to prove his worth not only to those around him, but also to himself. Much like predicting the weather, it is often hard to know what each day is going to bring. It's our protagonist's job to know, but like the rest of us, he is just taking it one day at a time. Over the years my view of Nicholas Cage has changed drastically. I went from finding him odd, to finding him bizarre, but embracing it. While he may not be making the best decisions regarding his roles as of late, he is pitch-perfect here. Not only does he look like your everyday pasty face on TV, but he is incredibly nuanced as a man just stumbling through life, earnestly trying to make the best of each day. While Verbinski would make a name for himself as one of driving forces behind the titanic Pirates franchise, we can be happy that he took the time in between those films to give us such a tender, insightful, and sadly overlooked film.