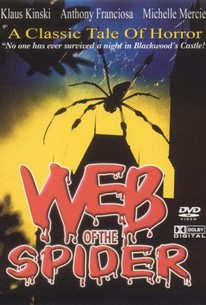 Web of the Spider Photos

In this remake of his own La Danza Macabra, director Antonio Margheriti casts Anthony Franciosa as writer Alan Foster, who accepts a bet from Edgar Allan Poe (Klaus Kinski) and his friend Thomas Blackwood (Enrico Osterman). No one has ever survived a night in Blackwood's castle, but the skeptical Foster gladly accepts the dare. The castle is striking and scary, which soon begins to affect Foster's mind. He meets Blackwood's sister Elisabeth (Michele Mercier) and the jealous Julia (Karin Field). Julia's portrait had intrigued him earlier, but it is Elisabeth whom Foster beds, only to see her stabbed by a stranger. The attacker's body vanishes after Foster kills him, and he quickly realizes that the castle is inhabited by vampiric ghosts. Foster must survive the horrors of the night and hold on to not only his life, but his sanity as well. This is an atmospheric film, full of crypts, skulls and mist, and Margheriti's direction is assured. The acting is solid all around, with a fine supporting cast including Peter Carsten, Raf Baldassare, and Silvano Tranquilli, though fans of the original might miss Barbara Steele just a little. Overall, this is a worthy remake with some spooky moments and a well-written script by Bruno Corbucci and Giovanni Grimaldi. The music was composed by the prolific Riz Ortolani.

Critic Reviews for Web of the Spider

There are no critic reviews yet for Web of the Spider. Keep checking Rotten Tomatoes for updates!

Audience Reviews for Web of the Spider

There are no featured audience reviews yet. Click the link below to see what others say about Web of the Spider!

Web of the Spider Quotes