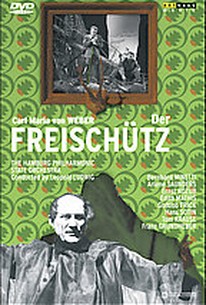 Der Freischutz is a textbook example of the phrase "filmed theater". In adapting Carl Maria Von Weber's opera to the screen, director Joachim Hess did little more than aim a well-focussed camera and shout "Action!" The leading roles are sung by Tom Krause, Toni Blankenheim, Hans Sotin and Arlene Saunders. The plot is librettist Johann Frederich Kind's tried-and-true blend of romance and mysticism, with a hermit and an emissary of Satan making important contributions. Originally produced for German television, Der Freischutz received limited theatrical distribution in the rest of the world. ~ Hal Erickson, Rovi

There are no critic reviews yet for Weber - Der Freischütz. Keep checking Rotten Tomatoes for updates!

There are no featured reviews for Weber - Der Freischütz at this time.