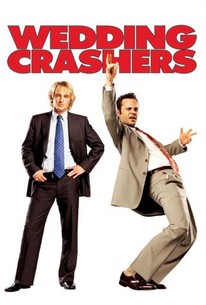 Critics Consensus: Wedding Crashers is both raunchy and sweet, and features top-notch comic performances from Vince Vaughn and Owen Wilson.

Critics Consensus: Wedding Crashers is both raunchy and sweet, and features top-notch comic performances from Vince Vaughn and Owen Wilson.

Critic Consensus: Wedding Crashers is both raunchy and sweet, and features top-notch comic performances from Vince Vaughn and Owen Wilson.

Two guys find out the hard way that sneaking into the wrong party can cause serious problems in this comedy. Jeremy Klein (Vince Vaughn) and John Beckwith (Owen Wilson) are a pair of longtime friends who work for a law firm, helping contentious couples mediate their divorces. Their job has given them a cynical attitude about marriage, and as a hobby each weekend the two make a point of crashing weddings reception, where they load up on free food and booze and try their luck at seducing the bridesmaids. When William Cleary (Christopher Walken), the nation's Secretary of the Treasury and a possible candidate for the Presidency, announces his daughter is to wed, the nuptials are billed as the social event of the year, and Jeremy and John decide they must attend the reception. However, John makes the mistake of falling head over heels for Claire (Rachel McAdams), the bride's sister, while Jeremy attracts the attentions of a woman he'd prefer not to be involved with, and soon their romantic peccadilloes get them in very hot water. ~ Mark Deming, Rovi

Will Ferrell
as Chazz Reinhold

John McCain
as Himself

A bawdy summer comedy for adults and mature teens, this movie features rapid-fire dialogue and sincere affection between best-friend leads and strong chemistry between the actors who portray them.

It's good, but it's no Anchorman.

Sadly, in spite of its cast and seemingly can't-miss premise, Wedding Crashers is at its best a succession of mild chuckles.

It's an easy, breezy, lanky Hollywood rom-com with a brain, for most of its running time.

The perfect example of a flawed but ultimately entertaining film.

Operating on the principle that lame verbal and visual gags are funny if the audience is repeatedly pummeled with them, Wedding Crashers sorely lacks a strong script and the kind of inventive direction worthy of its not-untalented leads.

The Frat Pack goes from strength to strength in a robust romp that's only marred by the director's apparent inability to say "Cut!"

What should've been an absolutely raucous and no-holds-barred lusty farce is nothing but lame-ass, safe, predictable, lowest common denominator, no-laffs garbage

With great acting, hilarious gags, and great writing, it actually lives up to the hype.

Vince Vaughn commits rampant acts of comic zeal while the script around him crumbles in a movie that loses its thrust like a cat caught in traffic.

A very funny comedy that invests more in odd situations than in punch line gags, with Vince Vaughn in a magnetic performance and a priceless Will Ferrell, but the film is unfortunately about thirty minutes longer than it should be, dragging a little bit in its third act.

One of the least funny things my brain has had to suffer through.

Plumbing new depths in vulgarity and tastelessness, "Wedding Crashers" is a tiresome compilation of recent American guy-girl movie clichés. The acting is poor and the script worse, making the cinema seat harder as each long minute goes by. Of course the audience lapped it all up, guffawing at each sophomoric gag. How depressing to see that this awful movie is #1 at the box office. Good cinematography doesn't rescue it. We squirm seeing Christopher Walken and Jane Seymour repeatedly embarrassing themselves. We yawn at Vince Vaughn and Owen Wilson lurching from unbelievable "I love ya Buddy" male bonding to predatory joint hunting of generic society chicks. Compared with the finer acting and script of now-running "Must Love Dogs", the winner of the toilet humor, bad language, degrade women and insult gays genre is undoubtedly "Wedding Crashers". Insatiable public appetite for this rubbish will ensure that we soon might see even worse movies, if that is possible. 2 1/2 stars 8-14-07

I put this one off for a while but wish i hadnt. I had a lot of fun watching this one. A good funny movies that made me laugh and smile tons.